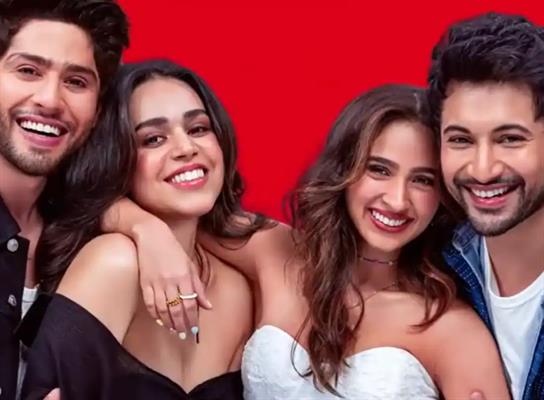 The announcement of Ishq Vishk Rebound going on floors has left the fans of the franchise super excited! The anticipation of watching Rohit Saraf, Pashmina Roshan, Jibraan Khan and Naila Grewal in this Gen-Z take on love is real! Taking us down the memory lane, the film has sparked some major nostalgic conversations on the internet, with memes going viral.
The film went on floors over a month ago this year in Dehradun and grabbed everyone's attention with the chemistry between all four actors being the focus. A BTS picture from the film is all the rage on the internet and has fans talking about how the picture looks like they share great chemistry already. Now, fans have even more to get excited about as the film wraps up its first schedule in Dehradun.
Ishq Vishk Rebound, starring Rohit Saraf, Pashmina Roshan, Jibraan Khan and Naila Grewal, is going to be a contemporary Gen-Z version of what love looks like today. A Nipun Avinash Dharmadhikari directorial, Ishq Vishk Rebound is being produced by Ramesh Taurani and co-produced by Jaya Taurani under the banner Tips Films Limited.
Tags : Ishq Vishk Rohit Saraf Pashmina Roshan jibraan khan Naila Grewal