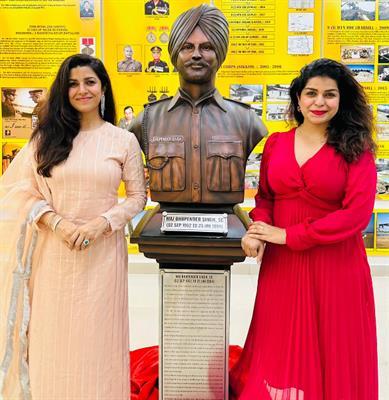 Nimrat Kaur recently visited Patiala for the inaugural ceremony of her father Late Major Bhupender Singh’s statue in the Patiala regiment. In honour of his contribution of serving his nation and motherland, a bronze statue of Major Bhupender Singh was inaugurated at the Heritage Hall at his parent regiment 64 Assault Engineer Regiment in Patiala.
While Nimrat’s father was awarded the Shaurya Chakra posthumously, she informs, “It’s a really special moment for us all to be here to honour his memory and partake in this wonderfully noble and incredible gesture by the Indian Army.”
“Patiala is very close to my heart because I have been in Patiala with my parents in two different tenures that my father had his postings there; when I was a little baby, and incidentally we lived in the same house for both our postings and the second time we were all together as a family as after that we lost him in Kashmir where we couldn’t join him. Patiala is also my favourite because I completed my 5th, 6th and 7th standard in a school there and that really laid the foundation where I am today, as extra-curricular activities, dramatics and incredible values were instilled in me as a child,” Nimrat adds.

After the success of 'Dasvi', along with Abhishek Bachchan, Nimrat will be seen in Maddock Films' next titled 'Happy Teachers' Day'