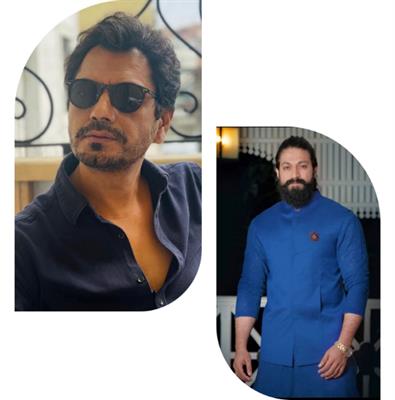 Versatility King of Bollywood Nawazuddin Siddiqui, is best known for his dynamic and different roles. Be it commercial films, content-driven cinema, or even web shows when it comes to author-backed roles or parts that need a powerhouse performer, Nawazuddin Siddiqui’s name is always at the top.
Recently, Pan India MegaStar in a recent interview was asked about which Bollywood actor he desires to work with to which Yash said “Nawazuddin Siddiqui” Yash declared that Nawaz is one Bollywood actor he would love to work with. If, by any possible means, the two can collaborate on a project together, it will be one of the most fascinating cinematic experiences.
This is not the first time an actor has wished to work with Nawaz, Earlier Anil Kapoor has also expressed his desire to work with Nawazuddin Siddiqui.
Nawaz has established himself firmly in the film industry where in spite of the cut throat competition, he always delivers fantastic performances, with his adaptability and consistency.
Meanwhile, on the work front, Nawaz has an interesting lineup of films which includes ‘Tiku Weds Sheru’, ‘Noorani Chehra’, and ‘Adbhut’ among others.
Tags : Yash nawazuddin siddiqui