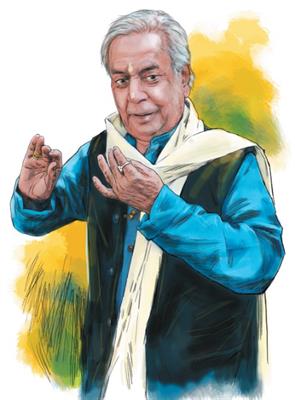 Pandit Birju Maharaj was a descendant of the Maharaj family of Kathak dancers.

Panditji died at his home in Delhi late Sunday after suffering a heart attack. He was 83.

A recipient of the country's second-highest civilian award, Padma Vibhushan, he was fondly called Pandit-ji or Maharaj-ji by his disciples and legions of followers, and was one of India's best known artistes.

According to reports, Birju Maharaj was playing with his grandsons late on Sunday night when his health deteriorated and he became unconscious. He was taken to hospital where he was declared dead.

He was diagnosed with kidney disease a few days ago and had been on dialysis.

Pandit Birju Maharaj was an expert drummer as well and marvelously played the Tabla and Naal. Panditji also gained mastery in singing and excelled in Thumri, Dadra, Bhajan and Ghazal.

Cineblues prays for eternal peace for the departed soul