Parambrata Chatterjee shared a beautiful reel with Geeta Basra from the sets of 'Notary'. 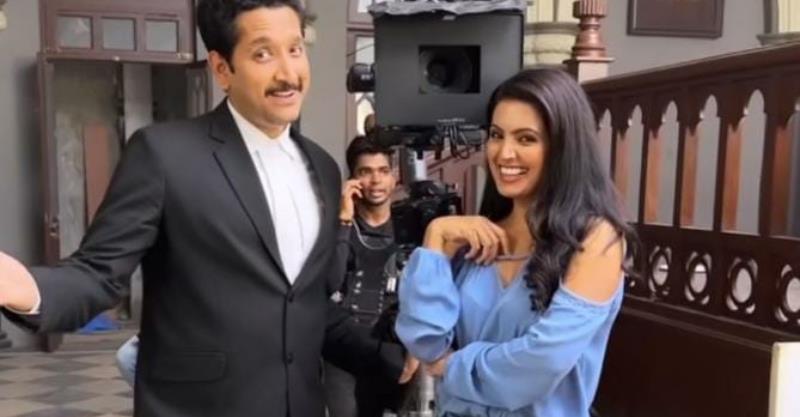 It’s a wrap for Parambrata Chatterjee and Geeta Basra’s film ‘Notary’. On 17th November, actor Parambrata chatterjee announced that the shoot for his film ‘Notary’ has come to an end. The versatile actor  Parambarat shared a beautiful instagram reel with Geeta from the sets of Notary.
The Mumbai shooting schedule of Parambrata chatterjee, the upcoming, has been wrapped up, the actor announced. Taking to Instagram, Param dropped a beautiful video announcing the film’s wrap with a beautiful 70s song. "Aacha toh hum chalte hai". The chemistry between actors Parambrata and Geeta Basra is one that could have literally been pulled straight from the reel and its made us fall in love with them.
Sharing the Reel, he wrote,“It’s a wrap from Notary!!Enjoyed every moment of working on this film..to every member of this team..Thank you.. Now Sheetal and Kishore will see you in theatres soon  on,” he captioned the clip.
Notary is a satirical comedy movie and its Kannada director Pawan Wadeyar's first Hindi film.  The film went on floors in October in Bhopal and a major chunk of shooting in Mumbai is over. After shooting two back-to-back ongoing schedules in Bhopal and Mumbai, The multi talented actor Parambrata completed the film on 17th November, the project was shot over a month and half in various local places of Bhopal and Mumbai. And now the film will begin work on the post-production.
In this film Parambrata will be seen playing a lawyer who never lies even in the most hostile situations. Parambrata’s character is in a profession that often tempts people to compromise their core beliefs. It’s a story about how he overcomes such situations while staying true to his ethics.
Parambrata Chatterjee movie Notary will hit the theatres in 2023.
Apart from Parambrata Chatterjee, Geeta Basra, Notary also features Akshay Kharodia and Dharshna Banik, Dalip Tahil, Manoj Joshi, Priya Banerjee, Shishir Sharma, Surendra Rajan, Zarina Wahab, and Mohan Agashe on the ensemble cast. #parambratachatterjee #parambrata