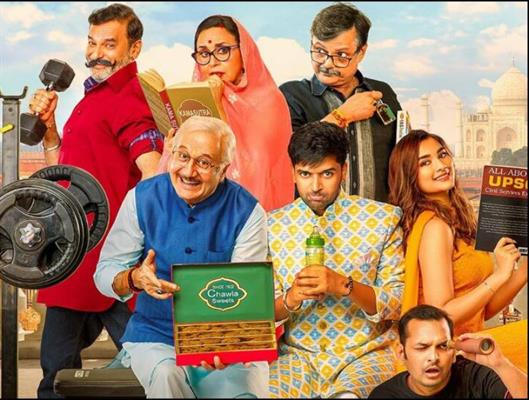 After sharing screen space with critical Cally acclaimed stars like Pankaj Tripathi, Rajkumar Rao in 'Ludo', Sharman Joshi in 'Kaashi In Search of Ganga' and Nushratt Bharuccha in 'Janhit Mein Jaari', Paritosh Tripathi has bagged yet another milestone project of his career. The multi-talented actor will be seen sharing screen space with Guru Randhawa, Anupam Kher and Ila Arun in a film titled 'Kuch Khatta Ho Jaaye'.
Speaking about the same, Paritosh reveals, "The film is currently being shot in Agra and I am playing one of the main characters. it's a big thing for me to share screen with stalwarts like Anupam Kher and Ila Arun so early on in my movie career."
You will also see him in the upcoming movie Tittled, Hari Om Hari as a hero in the film and ‘Selfiee’ by Dharma production as a cameo in it.
The poster of the film will be launched today and fans will get a glimpse of Paritosh's character in 'Kuch Khatta Ho Jaaye'.
Previously, Paritosh played the role of Devi alongside Nushratt in 'Janhit Mein Jaari' which was a film on social topic. Written by Raaj Shaandilyaa, the story of the film revolved around a young girl from Madhya Pradesh, who takes up the job of selling condoms in her town.
Tags : Paritosh Tripathi Kuch Khatta Ho Jaaye Guru Randhawa Anupam Kher