Pier Paolo Pasolini comes to an end at IHC 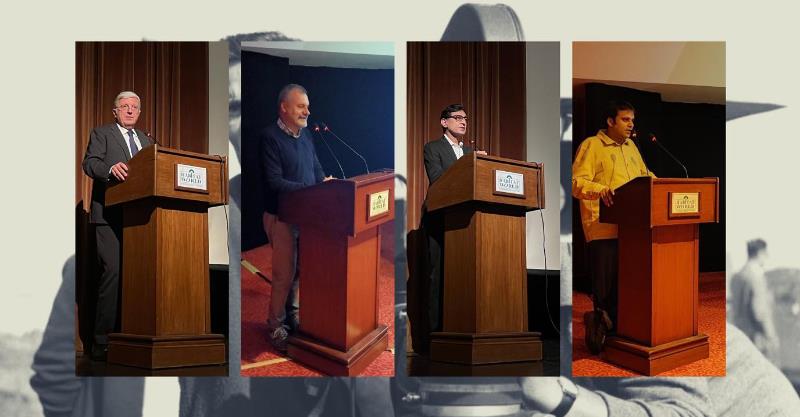 Italian Embassy Cultural Centre hosted a week-long Pier Paolo Pasolini retrospective in collaboration with the India Habitat Centre from November 2-9, 2022. As part of the retrospective, seven of Pasolini’s best-known films (6 feature films and 1 short film) were screened. The retrospective was inaugurated by the Ambassador of Italy to India Vincenzo de Luca and Sunit Tandon, Director, India Habitat Centre. Indian film critic Murtaza Ali Khan introduced Pasolini to the audiences while touching upon the importance of his cinema in the 21st century.
2022 marks the centenary year of the great cultural Italian personality Pier Paolo Pasolini. A poet, writer, director, screenwriter, playwright and columnist, Pasolini is considered one of the greatest Italian artists and intellectuals of the twentieth century. Endowed with an exceptional cultural versatility, he was outstanding in many areas. However, he contributed majorly as a filmmaker, painter, novelist, linguist, translator and essayist.
Keen observer of the society’s transformation post World War - II until the mid-seventies, he was very critical towards the bourgeois habits and the rising Italian consumer society. He started his film career as a screenwriter and famously collaborated on master Italian filmmaker Federico Fellini's film Nights of Cabiria.
Pasolini's first film as director was Accattone in 1961, which is set in Rome's marginal quarters, the underbelly inhabited by pimps, prostitutes and thieves that’s starkly contrasted with Italy's postwar economic reforms. Despite his neorealistic origins, Pasolini tried to distance himself from neorealism but the kind of cinema he made during his early years is often considered to be a kind of second neorealism.
Subsequently, he went on to make Il vangelo secondo Matteo [English Title: The Gospel According to St. Matthew (1964)], which has been described by the Vatican City newspaper L'Osservatore Romano as the best film on Christ ever made. The film is a cinematic rendition of the story of Jesus according to the Gospel of Matthew. What serves as a testament to the film’s authenticity is the fact that dialogue is taken directly from the Gospel of Matthew.
In his 1966 film Uccellacci e uccellini [English Title: The Hawks and the Sparrows], a mystic fable featuring the popular Italian comic-actor Totò accompanied on a journey by his son and a talking crow that spouts social and political philosophy. The film was a unique opportunity for Totò to demonstrate that he was a great dramatic actor as well. Deservedly so, Totò earned a “Special Mention” at the 1966 Cannes Film Festival.
Pasolini’s influence as a filmmaker, artist, and intellectual transcends the world of cinema and arts. A great example of this is how his 1971 short film The Walls of Sana'a helped convince UNESCO to safeguard the capital of Yemen, the city of Sana'a's built and natural heritage from an onslaught of land speculation. One of the oldest continually inhabited cities in the world, Sana'a holds an important part of history within its walls filled with medieval architecture and culture. The appeal that Pasolini made through his film was accepted in 1986 and the artistic old town of Sana’a was declared a UNESCO world heritage.
In the latter years of his filmmaking career, Pasolini continued to push creative boundaries, experimenting with both form as well as content. This resulted in some important films, particularly the three films which constitute Pasolini’s ‘Trilogy of Life,’ featuring The Decameron (1971), The Canterbury Tales (1972), and Arabian Nights (1974), based on a trio of masterpieces of medieval literature—Giovanni Boccaccio’s The Decameron, Geoffrey Chaucer’s The Canterbury Tales, and The Thousand and One Nights (aka The Arabian Nights), respectively. In this daringly bold trilogy, Pasolini explores sensuality and desire as he discovers a rather evocative form of cinematic storytelling that would inspire many filmmakers across the globe and across generations.
Pier Paolo Pasolini is widely revered and sometimes criticized for limning his cinematic canvas with such a wide array of colors that most filmmakers can only hope to achieve in their most vivid dreams. An undisputed poet of the cinema-verse, his films undeniably are culturally, socially, historically, and aesthetically important.
His films won awards at the Cannes Film Festival, Venice Film Festival, Berlin International Film Festival, Italian National Syndicate for Film Journalists, and New York Film Critics Circle, among others. The Gospel According to St. Matthew was nominated for the United Nations Award of the British Academy of Film and Television Arts (BAFTA) in 1968. Also, Nights of Cabiria, the film on which Pasolini collaborated with Fellini as a writer, won the Oscar for Best Foreign Language Film in 1958.
Nearly 50 years after his death, Pasolini’s importance as a filmmaker continues to grow just as his critique of consumerism becomes more and more relevant. Also, his critical examination of taboo subjects which today are finding support from major forums in the global arena have only reaffirmed his pre-eminent stature as an intellectual and an artist.
The retrospective was followed by a ballet performance titled ‘La Terra vista dalla Luna’ as a tribute to Pier Paolo Pasolini on November 10, 2022 at the India Habitat Centre.
Tags : Pier Paolo Pasolini