Poster of "Life Is Good'' launched 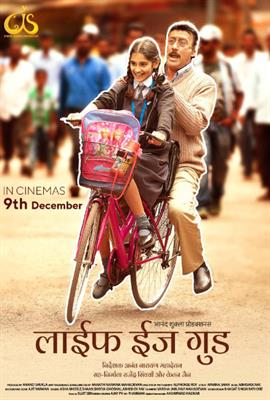 The poster of producer Anand Shukala's film ''Life Is Good'' launched on 27th Sepember in Mumbai. Based on the story written by Sujit Sen the film is directed by Anant Narayan Mahadevan and it stars Jackie Shroff, baby Sana, Ananya, Ankita, Swanand Verma, Rajit Kapur, Suneeta Sen Gupta, Darshan Jariwala and Mohan Kapur. Shot at the pictureseque locations of Mahabaleshwar and Panchgani the film has the story of an emotional bonding between a middle aged man who is living lonely life and a young girl.
Produced under the banner of Anand Shukla Productions,the associate producers of the film are Rajendra Singhvi and Ketan Jain  and it has screenplay by Anant Narayan Mahadevan, Varsha Jain and Ravi Mahadevan,cinematography by Alphonse Roy, editing by Anant Narayan Mahadevan,music by Abhishek Ray and audiography by Bhagat Singh Rathod.
The film is all set to release on 9th December all over.
Tags : Life Is Good Jackie Shroff