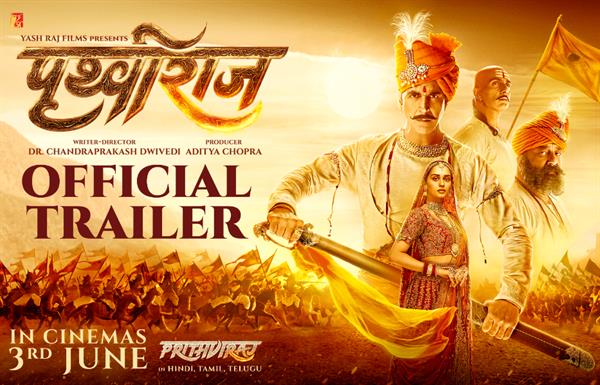 Superstar Akshay Kumar’s next is Yash Raj Films’ first historical, Prithviraj, which is based on the life and valour of the fearless and mighty Samrat Prithviraj Chauhan.
He is essaying the role of the legendary warrior who fought valiantly to protect India from the merciless invader Muhammad of Ghor. As Akshay unveils the trailer of the film today, he reveals his first reaction to the script of Prithviraj when it was narrated to him by Dr. Chandraprakash Dwivedi (Padma Shri).
Akshay says, “I want everyone to watch the story of Samrat Prithviraj Chauhan. When I was narrated the film, I had goosebumps through the narration and immediately said yes to the project because the script blew me away. It is an outstanding script, a true find that brings together history, patriotism, portrayal of the values that we should live by and also tells a story of love that is extremely rare to find.
He adds, “It has everything that I, as an audience, would go to the cinemas for and it also has huge scale that a historical like this deserves. I jumped at the opportunity because it is truly an honour for any actor to portray someone who has done so much for the India that we know.”
Akshay further adds, “As an actor, it is my privilege if I can bring such stories to life. Prithviraj is our labour of love. We have spent every second thinking about how authentically and how gloriously we can pay a tribute to the mighty king who stood for our nation and his countrymen till his last breath.”
Catch the trailer of Prithviraj here
Prithviraj has been directed by Dr. Chandraprakash Dwivedi, who is best known for directing the television epic Chanakya and the critically acclaimed film Pinjar. The ethereally gorgeous Manushi Chhillar plays the role of Samrat Prithviraj Chauhan’s beloved Sanyogita and her launch is definitely one of the most awaited debuts of 2022. The film is set to release on June 3 in Hindi, Tamil and Telugu.