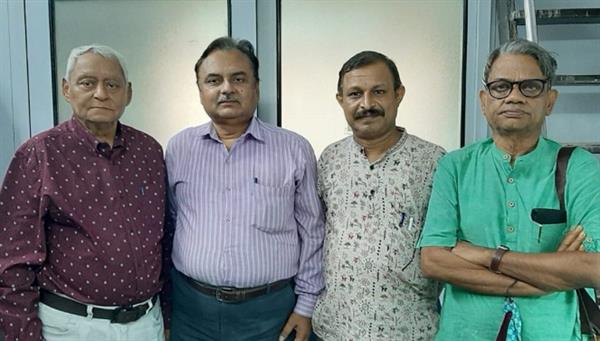 Eminent lifeographer Rajni Acharya who has served the film industry in a big way in several capacities since decades including the publicity in charge for films like ''Jaane Bhi Do Yaaro'' and TV serials "Ramayan'' and ''Nukkad'' now takes over charge as President of IDPA (Indian Documentary Producers' Association) which is a non-profit organization that came into being way back in 1956.

Bestowed with an effable demeanor Rajni Acharya has been in the industry for the last 45 years. He has made lifeography on the legendary singer and the golden voiced Mohammad Rafi called ''Daastan-E -Rafi'', besides making lifographies on legendary music composer Avisnash Vyas, C.A. Sunil Kumar Patodia and many others. He is now making a film on the life of legendary actor late Sanjeev Kumar.

IDPA has been registered as a public trust under the Bombay Public Trust Act 1950. Today IDPA is India’s single largest association of producers of documentaries, animation films and TV programmes.

Sanskar Desai - General Secretary IDPA, is a well-known documentary filmmaker with a number of films to his credit including "Haveli Sangeet," "Vav - Stepped Wells of Gujarat" "SaptaDhara" and many more... Sanskar has been invited to serve as Jury member & Chairman of the Jury as well as Selection & Preview committee member for very prestigious film festivals internationally as well as in India. He has conducted filmmaking workshops all over India & teaches filmmaking at a number of prestigious institutes & Universities. He has diligently served this august organization for the last several years in various capacities.

Ravindra Katyayn currently the Treasurer of IDPA is Head of Department of Hindi and Coordinator, Journalism and Mass Media at Maniben Nanavati Women’s College (affiliated to SNDT Women’s University) Mumbai. He teaches at Symbiosis Institute of Media and Communication, Pune since 2004 and has written Tele-serials, short films and feature films, besides making documentaries.

Even as it gets into the 66th year, IDPA has, from its inception, always worked in the interest of documentary and short film makers by providing an apt and able forum for like-minded professionals. It has succeeded in facilitating their working life by providing them with regular updates about professional opportunities, standardised rate cards and settling disputes. IDPA is also involved with educational institutions and reaches out to budding young filmmakers by organising screenings and holding workshops. IDPA has organized film festivals and instituted awards to recognize and reward the latent talents of Indian documentary & short film makers & film making students.

A galaxy of filmmakers and producers who have been presidents of IDPA include stalwarts like Satyajit Ray, Paul Zils, Shyam Benegal, Saeed Akhtar Mirza, Manmohan Shetty, Vijaya Muley, Mike Pandey, Jahnu Barua, Arunaraje Patil amongst other luminaries many of whom had embarked on their careers with documentary, animation as well as short films.