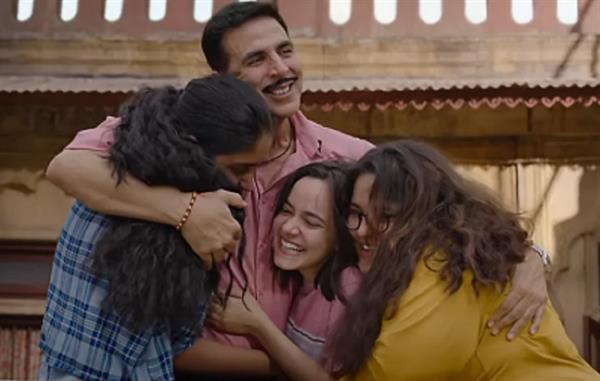 After the success of Atrangi Re, maverick storyteller Aanand L Rai has yet another family treat up his sleeves for us. With Raksha Bandhan, he is once again coming together with superstar Akshay Kumar to give his fans a story straight from the heart of India. Ever since the launch of the film’s first teaser poster, the excitement to catch this slice-of-life drama has been palpable. The recent trailer launch only upped the ante on all the euphoria around Raksha Bandhan and it quickly became one of the most talked about films in the country.
With all eyes on Aanand L Rai’s directorial, the makers of the song have now released the first song from their music album, Tere Saath Hoon Mein. Released amidst full fanfare, the song launch event was attended by superstar Akshay Kumar, filmmaker Aanand L Rai, music director Himesh Reshammiya and the star-cast of the film including Sahejmeen Kaur, Deepika Khanna, Sadia Khateeb and Smrithi Srikanth.
A beautiful tribute to the brother-sister relationship, Tere Saath Hoon Mein celebrates the promise of unrelenting support, uncompromising companionship and unconditional love between siblings. Adding to the iconic library of songs that honours the brother-sister bond, Aanand L Rai has brought back the nostalgia attached to golden Bollywood songs like Phoolon Ka Taaron Ka. A melodious composition by Himesh Reshammiya, the song has been sung by Nihal Tauro with the lyrics penned by lyricist Irshad Kamil.
Speaking about the song, director-producer Aanand L Rai said, “Raksha Bandhan is all about returning to your heart centre. The film celebrates a brother-sister bond like never before and Tere Saath Hoon Mein sets the narrative for the film. It made perfect sense for this song to be the first release from the music album. For me, the music of the film has always been its soul. I’ve always believed it should add to tone of the film and Himesh has done an outstanding job by capturing the emotions just right!”.
Staying true to his signature style of small-town storytelling, Aanand L Rai’s Raksha Bandhan is set to tug at your heart strings on 11th August, which also is the occasion of Raksha Bandhan. The film is set against the backdrop of middle-class Chandni Chowk and is yet another classic from the king of small-town stories, Aanand L Rai. Starring Bhumi Pednekar opposite Akshay Kumar, the film also features Neeraj Sood, Seema Pahwa, Sadia Khateeb, Abhilash Thapliyal, Deepika Khanna, Smrithi Srikanth and Sahejmeen Kaur.
Written by Himanshu Sharma and Kanika Dhillon, the Aanand L Rai directorial has been co-produced by Aanand L Rai, Alka Hiranandani and ZEE Studios. Presented by Colour Yellow, ZEE Studios and Cape of Good Films, the film is slated to hit screens on 11th August 2022. The countdown to catch the film is already thick in the air…
Tags : Atrangi Re Aanand L Rai Raksha Bandhan akshay kumar