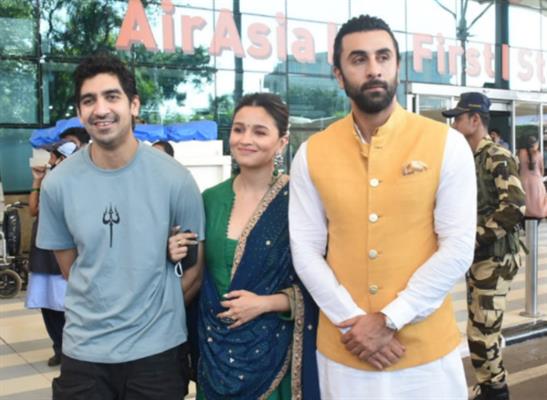 Brahmastra is only two days away from the release and the anticipation is through the roof. Alia Bhatt, Ranbir Kapoor, director Ayan Mukerji and the producers have left no stone unturned to promote the film.

While there has been some boycott calls for the film, the advance bookings are showing a positive trend. Amidst this, the lead actors and the director stepped out on Tuesday to visit Mahakal temple in Ujjain but were stopped by Bajrang Dal members.

In a video, a Bajrang Dal member said that they won't let them enter the temple.  “We are protesting against Ranbir Kapoor and won't let him enter the Mahakal temple. He made derogatory statements against our gaumata. He had said eating beef is good,” he said.
Tags : Ranbir Kapoor Alia Bhatt Ayan Mukerji Brahmastra