Ranbir Kapoor’s fans get emotional, break-down in an endearing fan meet and greet for Shamshera! 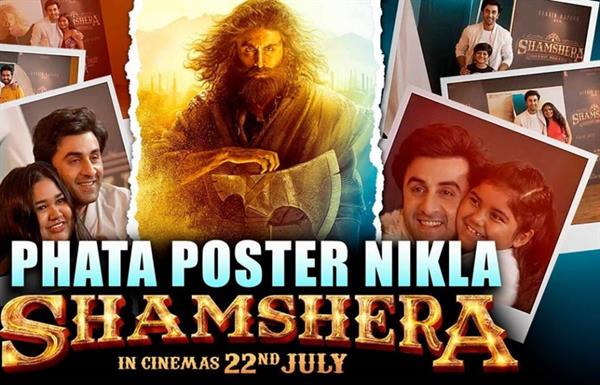 Bollywood superstar Ranbir Kapoor, is playing a larger than life quintessential Hindi film hero with the action entertainer Shamshera. Ranbir, who is coming to the big screen four years after he delivered the blockbuster Sanju, did an exclusive fan meet and greet event with about 30 lucky fans and showed them the first poster of Shamshera! The endearing hush-hush event that took place around a month back, saw his fans get emotionally overwhelmed and they broke-down when they were surprised by the presence of their favourite screen icon who rarely makes public appearances and is not available on social media!
Ranbir is seen saying, “My fans were specially invited today to launch the poster of my film Shamshera. But there was a small twist. They didn’t know I was going to meet them and spend time with them.”
The story of Shamshera is set in the fictitious city of Kaza, where a warrior tribe is imprisoned, enslaved and tortured by a ruthless authoritarian general Shudh Singh. This is the story of a man who became a slave, a slave who became a leader and then a legend for his tribe. He relentlessly fights for his tribe's freedom and dignity. His name is Shamshera.
The high-octane, adrenaline-pumping entertainer is set in the 1800s in the heartland of India. It has the big promise of a never seen before Ranbir Kapoor, who plays Shamshera in the film! Sanjay Dutt plays Ranbir’s arch-enemy in this huge casting coup and his showdown with Ranbir will be something to watch out for as they will ferociously go after each other with no mercy.
Directed by Karan Malhotra, this action extravaganza has been produced by Aditya Chopra and is set to release in Hindi, Tamil and Telugu on July 22, 2022.
Tags : Ranbir Kapoor Shamshera