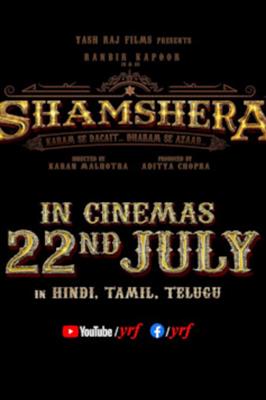 The makers the first glimpse today with the release date.

Sharing a minute-long teaser featuring the three stars on YouTube and social media, the makers announced, "A legend will rise on 22nd July! @yrf’s much-awaited big ticket spectacle #Shamshera starring superstar #RanbirKapoor @Vaaniofficial @duttsanjay is set to release at a theatre near you in Hindi, Tamil and Telugu."

The teaser sees the three actors sitting in the centre of a dimly-lit space surrounded by weapons. Sanjay Dutt says in Hindi, "This story is of the one who said slavery of anyone is not good, neither of others, nor of the people close to us." Vaani Kapoor then continues, "This story is of the one who earned a dream about freedom in his father's legacy."

Ranbir Kapoor, who says, "But nobody gives you freedom. You have to win it. Karam se dakait, dharam se azaad Shamshera (In name a dacoit, in reality free)!"

Some reports suggest that Shamshera is about the dacoits of pre independence era.

The Indian Hindi-language period action drama is Produced by Yash Raj Films and directed by Karan Malhotra, the film stars Ranbir Kapoor ( in a double role) with Vaani Kapoor and Sanjay Dutt portraying the antagonist.

Also Read :Badhaai Do movie review: Many badhaiyaan for making such a fun film about a sensitive subject