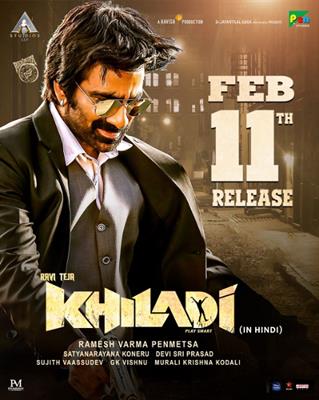 Its an action-packed entertainer which is set to set the Hindi screens on fire after the outstanding success of Pushpa – The Rise in Hindi.

Ahead of the big release, the makers have unveiled the trailer and it is an out and out action-packed entertainer designed to please the mases.

Mass Maharaja seems to be in his element.

Written and directed by Ramesh Varma who is also the co producer with Satyanarayana Koneru. Made under the banner of Pen Movies and A Studios LLP. Khiladi stars Ravi Teja in a dual role alongside Arjun Sarja, Unni Mukundan, Meenakshi Chaudhary, and Dimple Hayathi.