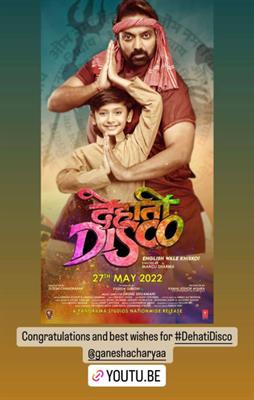 As Ganesh Acharya celebrates his 51st birthday, he received yet another special surprise from the B-town for his upcoming film, Dehati Disco.
Directors like Rohit Shetty and Rajkumar Hirani shares a very close bond with Masterji for years and as Ganesh Acharya celebrates another successful year in Bollywood, they took to their social media and wished him all the luck for his upcoming film, Dehati Disco.
Master Ji, definitely is the favourite choreographer in the industry. As he is actively promoting his film, Ranbir Kapoor too graced his recent event and celebrated his 51st birthday along with the cast of Dehati Disco.
Dehati Disco starring Ganesh Acharya and Super Dance-Chapter 3 finalist Saksham Sharma, Ravi Kishan and Debutant Sahil Khan is directed by Manoj Sharma, produced by Gitesh Chandrakar, Vaseem Qureshi and Kamal Kishor, under banner Qureshi Productions Pvt ltd and One Entertainment Film Productions, set to release in cinemas on 27th May 2022.
Tags : Ganesh Acharya Rohit Shetty Rajkumar Hirani