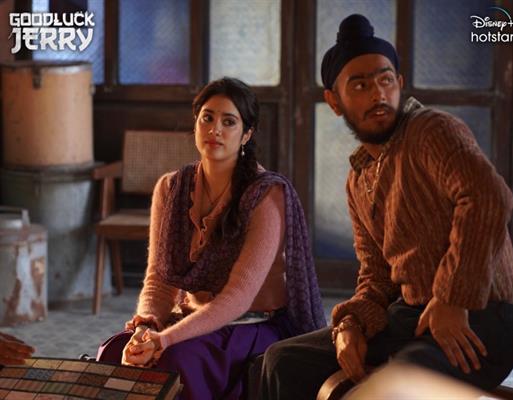 24-year-old Delhi boy, Sahil Mehta who wowed audiences with his performance in Tabbar and Guilty will now be seen in a prominent role in the much-awaited ensemble film, Good Luck Jerry starring Janhvi Kapoor. The film is releasing on Disney + Hotstar on 29th July 2022.
In Good Luck Jerry he plays the role of a 20-year-old Sikh boy from Punjab, who wants to learn the business of drugs and crime.
Sahil will also be seen in an important role in Anand L Rai’s Raksha Bandhan starring Akshay Kumar & Bhumi Pednekar which is slated for a theatrical release on 11th August 2022.
Talking about how Sahil prepared himself for the role Sahil says, “Jigar is a person who belongs to the world of drugs and crime at the same time that he is a young teen with a lot of passion and raw energy. He is also a Sikh, so I didn't cut my hair, not just my beard, but anywhere on that body so I could get in the skin with him.
Monobrow that we see on character is real, I used to put mustard oil all over my body and get a tanned complexion by soaking in natural sunlight, which gives my character that rusty complexion as he is from a village in Punjab. We had to wear makeup too so I couldn't get too tanned naturally. Rest, whenever performing or preparing for a role, I try to be in the moment and put myself in that circumstance.”
Sahil shares his experiences of working with Janhvi Kapoor, “She is such a sweetheart, so sweet and warm. There was so much I learned from her. It used to motivate me to work even harder because she is my age, and I remember she moved between cities as she promoted her other films while we were filming for Good Luck Jerry.”
Sahil adds, “Mr Mukesh Chhabra has given me immense support. He was the one who cast me in Good Luck Jerry and continues to approach me for the roles and for all the projects that I am part of. In addition, Aanand L Rai Sir cast me in Raksha Bandhan, after watching my audition tape and work in Good Luck Jerry, since he is producing both the films.
Sahil was also nominated for the Best Actor award for his role in short film Gair at the Kashish Queer Film Festival, Mumbai. His new short film Birha is selected at the Hollywood Shorts Fest 2022.
About Sahil Mehta
Sahil did his theatre training at VAYAM - the Theatre Society of Shivaji College, Delhi University and Foundation Course in Screen Acting (short course) from Film and Television Institute of India, Pune. The actor is a science graduate majoring in Biochemistry Honours from Shivaji College, Delhi University. He gradually developed his love for acting from his childhood days as he was into school dramas and plays. Later he was associated with theatres to polish his acting skills.
Eventually, the actor thought of giving it a try in the acting industry and right from his debut project there’s been no looking back for him. Besides being a full-time actor, Mehta is very active in sports such as cycling, scuba diving, basketball, roller skating and badminton. He is fluent in English, Punjabi and Hindi.