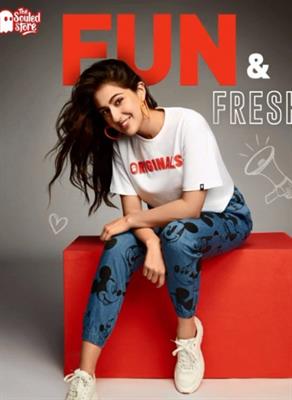 In just a short span of 3 years, Sara Ali Khan has not only emerged as one of the most bankable actresses but also an influential name in the brand world, endorsing the top ones. And now, the gorgeous actress has turned entrepreneur!

Riding high on the success and critical acclaim of her last release ‘Atrangi Re’, Sara made an official announcement today and revealed her decision to turn entrepreneur at the young age of 26.

Taking to her social media, the actress shared a post by putting up her vibrant picture, which read

Taking to her social media, the actress shared a post by putting up her vibrant picture, which read, “Today’s the day! 🥳 I have been waiting so long to make this announcement 😍📣 I am very proud to let you all know that I’ve invested in @thesouledstore 🙌🙌 It’s the first of its kind investment for me. I met the founders and the team of the #MadeInIndia brand last month and we were an instant match! It gives me so much joy to present our FUN & FRESH Summer drop to you on The Souled Store website and app. Hope you enjoy my picks! Stay tuned for more fun drops ❤️

Apart from being a lucky mascot at the box office and one of the leading female stars of her generation, Sara is fast emerging as a savvy businesswoman, and all this at such a young age.

Sara, who was recently featured on the cover of a leading magazine, who bestowed upon her the tag ‘Young & Restless’ is truly an achiever as her stardom has fast superseded her peers.