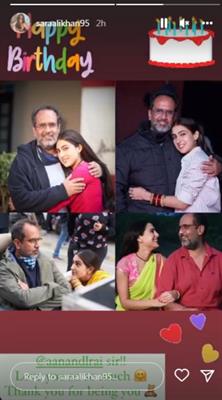 Bollywood actress Sara Ali Khan took to her social media stories to extend wishes to the blockbuster director of her recent hit ‘Atrangi Re’. Aanand L Rai, who turned a year older today has given Sara Ali Khan one of the biggest breaks of her career.
Her performance as Rinku was widely appreciated by the audience and the director himself. Sara, who is said to be a director’s actress by Anand L Rai, shared a bunch of pictures of herself and the filmmaker from the sets of the film.
The star penned down a heartfelt note saying “ @anandlrai sir!! Love you so much, sir. Thank you for being you.”
Tags : Sara Ali Khan Atrangi Re Aanand L Rai