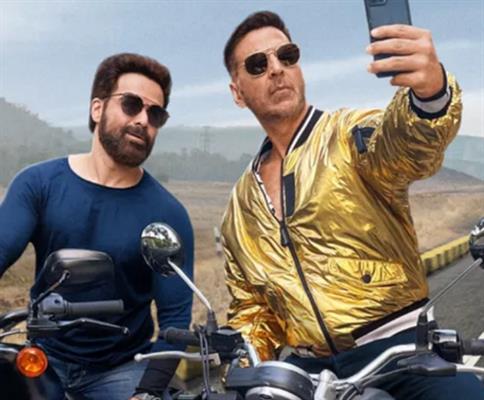 Akshay Kumar and Emraan Hashmi much awaited Selfiee will release on this date.

The makers have officially announced the release date of the comedy drama.

Made under the banner of Dharma productions, Prithviraj productions, Magic Frames, and Cape of Good Films’ Selfiee stars Akshay Kumar and Emraan Hashmi along with Diana Penty and Nushrratt Bharuccha.

Selfiee will release in theatres. Said to be a drama-comedy in the making, Selfiee is directed by the man who is fresh off the success of Good Newwz and JugJugg Jeeyo  Raj Mehta and produced by (Late) Aruna Bhatia, Hiroo Yash Johar, Supriya Menon, Karan Johar, Prithviraj Sukumaran, Apoorva Mehta, and Listin Stephen.

Previously in Jan 2022, the tease of Akshay Kumar and Emraan Hashmi first mega collaboration was released.

Akshay and Emraan were seen riding their bikes in a scenic mountain background.

Akshay wrote, “Found myself the perfect #Selfiee partner! Hey @karanjohar, have we slayed this selfie game or what?😉 @therealemraan.”

Emraan shared the same picture on his Instagram handle and wrote, “Joining the #Selfiee club with @akshaykumar!🤳🏻.”

The audience is in for a uniquely crafted story that takes them on a drama filled hilarious break. Carrying forward the legacy of contemporary storytelling and driving Hindi cinema with a diverse set of talent & genre of stories, we are hopeful that with ‘Selfiee’ the audience will be able to appreciate this light-hearted film.