Exclusive- A crowd of fans mobbed the gate of Shehzada sets in Haryana to wish Kriti Sanon on her birthday! 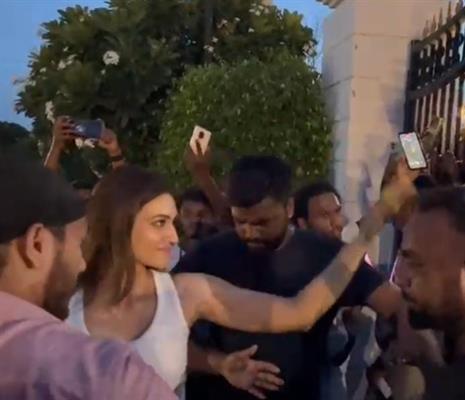 Kriti Sanon has come a long way on her own merit to be the leading lady of Indian cinema today with one of the best and most massive lineups ahead. On her birthday, while she was busy working, her fans could not contain their excitement.
In an exclusive video from the sets of Shehzada in Haryana, where Kriti was shooting on her birthday, one can see a huge mob of fans, crowding at the gate as they poured love for Kriti, screaming birthday wishes for her to hear.
The overwhelmed actress took time out from her shoot to go to the gate and meet them, shaking hands with a few as the screams of excitement got louder on getting a glimpse of the Mimi actress, who thanked them for giving so much love to her.
In the evening pictures had also gone viral from the set where the team of Shehzada brought in a cake for her and she could be seen cutting it with everyone on the sets, from director, Rohit Dhawan to her co-star, Kartik Aaryan followed by a fun schedule wrap party.
With one impressive career graph behind her, Kriti's lineup ahead also looks extremely promising with films like Adipurush, Shehzada, Bhediya, Ganapath and Anurag Kashyap's untitled next in the pipeline.
Tags : Shehzada Kriti Sanon