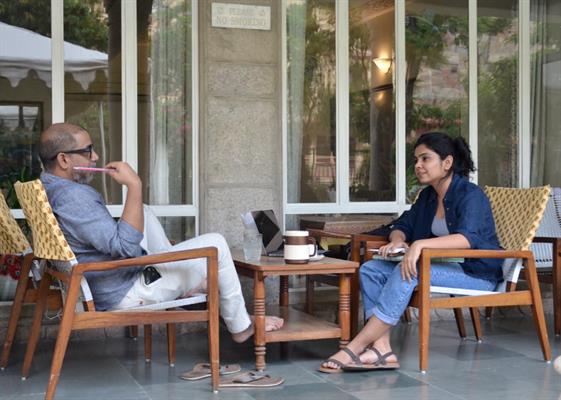 Tabbar fame Ajitpal Singh and Sherni writers Aastha Tiku and Bikas Mishra mentored the 2nd Screenwriters’ Residency programme 2022
Rewrite Screenwriters’ Residency programme 2022 announces its official talent and projects that were selected and mentored in its second phase Rewrite 1.2, held between 24 – 30th August 2022.
In this edition, 11 stories set in Maharashtra, Rajasthan, Punjab, Jharkhand, Meghalaya, Chhattisgarh, Gujarat and Delhi, were selected to participate in the residency.
The writers were mentored by writer-director Ajitpal Singh (Fire In The Mountains and Tabbar), Sherni writer Aastha Tiku and noted filmmaker and script mentor Bikas Mishra (Chauranga)
Rewrite is a young biannual residential program for emerging screenwriters. A guided experience set in the heritage city of Jaipur. A dozen emerging writers come together to creatively develop their ideas. Beginning from a logline to a pitch ready screenplay, this residency helps the writers enhance, refine and detail out their stories for the screen.
Pay What You Can model
The residency offered the option of pay(ing) what you can to all selected applicants to ensure the participation at the residency moves out of the sphere of economic pressures for both the writers and the organisers. Not only did this aid in reaching out to more writers with powerful stories, but this also recouped an amount closer to the cost of holding the residency, more than what the regular fee structure capped at 30K was bringing back.
The organisers wanted the residency to be open to a diverse set of people with authentic and exciting stories. Studio Ainak ensured partial fellowship for needy writers with great scripts and bore the differential cost.
The selected and mentored writer and projects for Rewrite 1.2 phase were
Sujata Never Killed the Yellow Budgie II English
By Abhishek Pandey
The Mourning II Hindi
By Aditya Verma
Vilakhanpur II Punjabi
By Amit Jindal
Zakia II Hindi
By Arastu Zakia
Ahichhatrapur II Marwari
By Arvind Charan
Udaas Pahad Aur Ghum Pakshi II Kumauni
By Nidhi Saxena
The Late Autumn Dream II Bengali, Khasi & English
By Pramati Anand
Jay Prakash Ka Dukh II Maithili & Hindi
By Rahul Mandal
Black Miracle II Marathi, Hindi & English
By Rohan Apte
Jholachhap II Hindi
By Swapnil Jain
Possessed II Hindi & Punjabi
By Udit Khurana
There were four Observers  who witnessed the mentor mentee sessions from a distance- Pavithra Sreekumar, assistant writer and director at Platoon One Films, Santa Nibedita, developmental practitioner and filmmaker, Vikesh Patel
Finance and commodities trading practitioner interested in storytelling, Vivek Kunwar, Writer/director in the documentary and ad-film space. Founder of Motif Global, a Delhi-based production company.
Suruchi, Founder Rewrite said, "Rewrite is a place for collective growth - a place where young writers share their personal stories within the community to find creative ways to express themselves through their script. Very happy to have taken the chance to open access to potential writers with the Pay What You Can model, we saw a diverse group of writers thanks to that approach."
Ajitpal Singh, writer-director & mentor at rewrite said, "These young girls are doing something unique at Rewrite. We often hesitate to take initiatives thinking about various challenges. I learned after coming here that more than money, resources or network, one needs courage to dream of something like this."
Bikas Mishra, writer-director & mentor at rewrite said, "The future of Hindi cinema is being created here at rewrite. It connects us back to our roots and shows us up close the diversity of stories in India. Rewrite is providing fertile ground for authentic Indian stories."
Mentors profile:
Aastha Tiku is the writer of the Vidya Balan starrer, SHERNI (2021). A film about tiger conservation and human-animal conflict, the film received rave reviews for its sensitive depiction of the subject in one of a kind ecological fiction genre. Aastha has an MA in Economics and an MA in Philosophy from Kings College London. She has worked in London, Delhi and Mumbai as part of a policy think-tank, a social impact organization, and a qualitative research firm. Currently based in Mumbai, Aastha is the co-founder of Critical Mass Films where she develops feature film projects.
Ajitpal Singh is a self-taught filmmaker living in Mumbai. His first feature film, Fire in the Mountains, premiered at Sundance Film Festival in the world cinema dramatic competition. Since then, the film has travelled to more than thirty festivals and won 13 awards. The film also got a theatrical release across North America and Canada with great reviews.
His debut web series Tabbar premiered on Sony Liv in 2021, Tabbar has topped most of the Indian list of best series from 2021, and it was at number five in the Variety magazine’s list of best International series of 2021. Ajitpal was also part of Sundance Screenwriter’s Lab India in 2012.
Bikas Mishra is an award-winning screenwriter-director known for his debut feature Chauranga that won the Grand Jury Prize at the Indian Film Festival of Los Angeles and was declared Best Indian Feature at Mumbai Film Festival (MAMI)in 2014. His short film "Naach Ganesh" (Dance of Ganesha) widely travelled to prestigious festivals, including Clermont Ferrand, Rotterdam, Busan and IFFLA. Bikas, currently a Global Media Makers (GMM) fellow of Film Independent, Los Angeles, is a recipient of the prestigious Hubert Bals Fund for his upcoming project.