Side A Side B: Luv Films valentine gift to release on Youtube Tseries channel 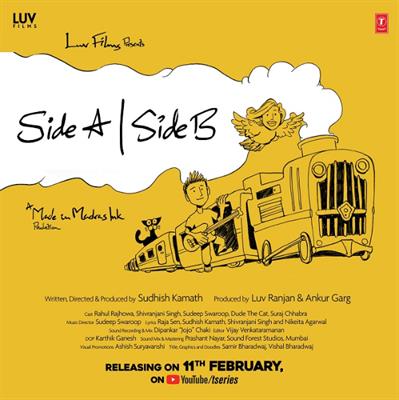 After delivering massive hits across cinemas and OTT platforms, this Valentine’s season, Luv Films gears up to release a feature film on T-Series’ YouTube channel. Titled Side A Side B, this musical love story, presented by Luv Films, will premiere on 11th February 2022, tapping new-age audiences through T-Series’ massive subscriber base.

Side A Side B is the bittersweet romantic journey of a young couple taking one last train trip together with their cat Lou, from Guwahati to Mumbai, as the fate of their relationship hangs in the balance.

The live musical playing out through ten songs captures the climactic moments between the young lovers torn between ambition and growing distance as Joel and Shivi realize they might be headed in different directions.

Side A Side B

Will ambition set them apart or love bring them closer? Get ready to board the musical love train. Side A Side B 🚂🎸
Releasing on 11th February, on YouTube/TSeries.
Trailer out tomorrow.#TSeries @TSeries #BhushanKumar @luv_ranjan @gargankur @LuvFilms @ShivranjaniS pic.twitter.com/K0hGZFcGgh

Director Sudhish Kamath says, “This is nothing short of a miracle if you consider eight people got on a train, shot a movie with live music with young musicians, who rehearsed for weeks to be able to shoot the film in the course of 44 hours. But the bigger miracle is that our little indie was discovered by Luv Films who believed in it enough to take it to T Series. I dedicate this movie to all unsung indie artists who struggle to find a platform for their talent. I’m lucky I found the right collaborators in Rahul, Shivi, Sudeep, Raja, Karthik, Jojo and Vijay and am eternally grateful for this dream launch.”

Luv Ranjan adds, “I haven't watched too many independent films. So when I watched the film, I was surprised and curious. How did they do this? If it could hold my attention, I was sure it could hold the attention of young people who watch our movies. This is an experiment, of course. If it works, it might encourage more filmmakers and musicians to take the initiative, make their movies and tell their stories, no matter what. Because all you need to make a movie today is a phone. You don’t wait for a producer; you go ahead and make the movie you really believe in. No excuses.”

In the words of The Beatles, this Valentine’s season, all you need is love.

Luv Films presents Side A Side B, a Made In Madras Ink production, produced by Luv Ranjan & Ankur Garg, written and directed by Sudhish Kamath; starts streaming on the T-Series You Tube channel from 11th February onwards.