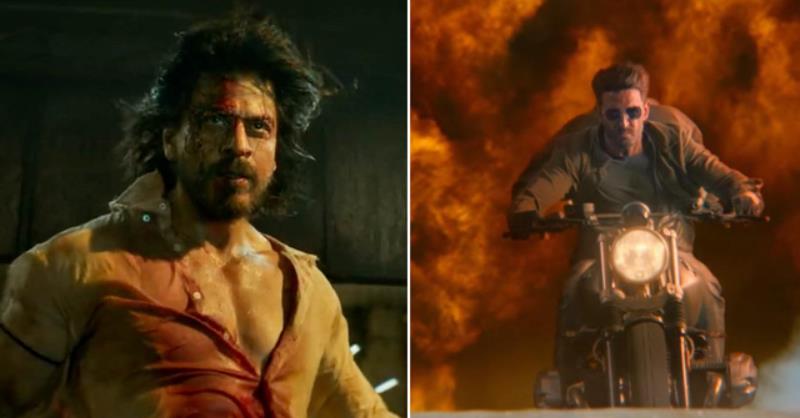 Bollywood king Shah Rukh Khan unveiled the teaser of his upcoming film 'Pathaan' on his 57th birthday, a certain section of social media seemed unimpressed.
'Pathaan' presents the story of an Indian spy who can get into any system or circle given his stealth and chameleon abilities to merge with the world that he resides in.
Several users took to social media to talk about the teaser. A netizen compared a scene from 'Pathaan' to Prabhas's 2018 film 'Saaho'. In the scene, SRK is seen flying using a jetpack.
A social media user pointed out a scene from the 2005 film 'Dus', where Zayed Khan used a grenade to blow up a tank while riding a bike. One even noticed and shared photographs to compare sequences from 'War' starring Hrithik Roshan and Tiger Shroff.
One commented about the VFX used in 'Pathaan' and called it "embarrassing", while another said it was a "crowd-funded B grade Action movie from Hollywood".
A shocked user said that the teaser felt like watching "Captain America", 'Die Another Day' and 'Beast & Vivegam'.
'Pathaan', produced by India's premier studio conglomerate Yash Raj Films, will drop in theatres on January 25, 2023.

a) The tunnel scene - nothing to say about it, you can clearly see the copy in Pathaan

b) Not to mention the ZINDA HAI comes straight out of TIGER ZINDA HAI While Srk copied it in pathaan -2023 . pic.twitter.com/GiDcJtZKQw

The tunnel scene - nothing to say about it, you can clearly see the copy in Pathaan

Here's a thread of copied scenes shown in #Pathaan Teaser!

a) THE BIKE SCENE - SRK ON BIKE

b) THE GHUNGROO DANCE SCENE- AND SRK DEEPIKA DANCE NUMBER

Here's a thread of copied scenes shown in #Pathaan Teaser!