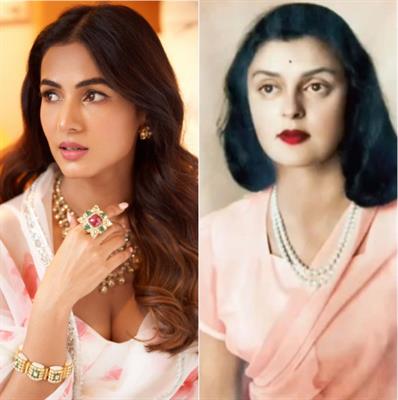 Sonal Chauhan is very unique when it comes to beauty and everyone is a major fan of her natural glow and elegance. One post on her Instagram handle and the actress is swarmed with DMs and comments and we too, are super fans of her beauty, style and pictures!
She recently uploaded a photo to Instagram of herself wearing an pastel peach pink saree and her fans immediately collated her beauty and grace to that of Maharani Gayatri Devi, the third maharan consort of Jaipur. In this picture we can see an uncanny similarity between her and Maharani Gayatri Devi in the same colour saree, poised pose and breathtaking beauty! What makes this comparison even more special is that the actress in fact descends from a royal family, which undoubtedly contributes to her grace!
Sonal appeared as a Royal beauty in this picture  just like Maharani Gayatri Devi did in this photo taken hundreds of years ago. Fans can't stop praising the striking similarity, which is a significant factor to consider given that Maharani Gayatri Devi was most known for her fashion sense when she was an adult at the time. Sonal's composure and attractiveness makes it obvious that she is from a royal family and she is a stunning beauty who consistently attracts attention.
What do you think ?
On the work front, Sonal Chauhan is all set to star in the T-Series and Om Raut's magnum Opus, Adipurush and as the lead in Praveen Sattaru's The Ghost opposite the South superstar, Nagarjuna!
Tags : Sonal Chauhan Maharani Gayatri Dev