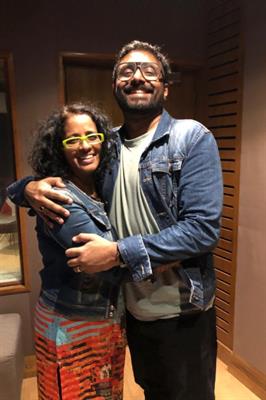 The recently announced film ‘First Second Chance’ by the renowned CEO & Founder of Streetsmart Productions, Lakshmi R Iyer, is joyous to announce the song ‘Haanji Naaji.
The song is immaculately voiced by singer Hamsika Iyer, who have given us songs like Raabta and Chammak Challo. The composition of the music is done by Anand Bhaskar.  He has sung amazing songs such as 'Munna Rap,' in web series Mirzapur, ICC Men's T20 World Cup 2021 Official Anthem with singers Amit Trivedi and Sharvi Yadav. 'Oru Dinam' from the Malayalam action film Big Brother starring Malayalam actor Mohanlal, actor, and producer Arbaaz Khan, and many more. The simply beautiful lyric for the song is provided by Shraddha Sehgal.
In the words of Music Composer Anand Bhaskar, “I had an absolute blast working on this music for ‘First Second Chance.’ I truly got to work with people I love and look up to. An overall extremely talented bunch of people. Starting with Lakshmi, the director of the film and the CCO – The Chief Chatterbox Officer - as I like to call her. I also got to work with my friends, Keshav Parthasarathy and Shravan Sridhar who added their own bits to the music. It’s a dream come true to work on the same project as Resul Pookutty Sir. My long-time friend Shraddha Sehgal who has written a bunch of songs for me. One of my favourite singers from the country and probably one of the best – Hamsika Iyer – who is such a bright spark for everyone. It was an amazing experience working with Renuka ma’am and Ananth sir who are absolute sweethearts and legends in their own rights. A wholesome family experience, and that is the film all about as well. I cannot wait for the film to come out and have people hear our music as well.”
On the other hand, Lyricist Shraddha Sehgal says, “Haanji, Naaji Me Umar Guzaari, Mile Hum Abki Baari. These lines sum up the essence of the song and the film ‘First Second Chance,’ that the super talented Lakshmi Iyer is about to bring to the world. I am so glad to get to write the song. Do hear it, it’s a marvel created by Anand Bhaskar. Hamsika ma’am’s voice is the perfect voice for it. It has created magic and every word is expressed meaningfully. It will surely reach your heart. Anand is an amazing talent and he trusted me to write this song on a sensitive topic and I am so glad that it fits the plot beautifully. I remember being at Lakshmi’s and being stunned to see so much energy and positivity in her. She is so much fun to work with and I can’t wait for more. We have grown watching Renuka Ji and Ananth Ji on screen and now to work with them on the same project seems like a fantasy. I feel blessed to work with such an experienced and renowned bunch of artists. The cast and crew of the film has put in a part of themselves in it and we hope the audience love it just as we did while making it.”
Singer Hamsika Iyer shares, “Did I enjoy my song? Haaji. Was I stressed while working on the song? Naaji. I’ll never forget the day when I got the call from Lakshmi R Iyer for her film. I was even happier when she conveyed that the music composer is Anand Bhaskar – a person whom I have always admired, his musicianship, vocals, energy, a very hardworking and a cool guy. I’d also like to extend my thanks to Shraddha Sehgal for the amazing yet simple lyrics. Shravan Sridhar and Keshav Parthasarathy, you guys are amazing. The kind of vibe that these guys bring into any songs is just infectious. Thank you, Prathamesh, for putting all the elements beautifully in all places. I have always been a huge admirer of Renuka Shahane and Ananth Mahadevan, and it feels amazing to be a part of a project that has incredible talent. Once again, thanks to Lakhsmi for giving me Haanji and Naaji.”
The film will be released on 5th June 2022. The film consists of stellar cast such as Renuka Shahane, Ananth Mahadevan, Devoleena Bhattacharjee, Saahil Uppal and Nikhil Sangha. The story behind the film is inspired by real life. The film is produced by Streetsmart Production with immaculate direction by Lakshmi R Iyer.
Tags : Renuka Shahane Ananth Mahadevan Devoleena Bhattachar Saahil Uppal Nikhil Sangha