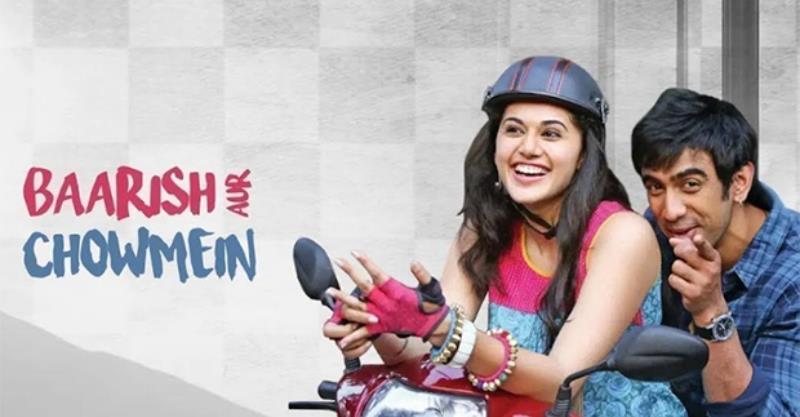 Engaging and inspiring audiences with path-breaking and unique stories each month, Zindagi has constantly provided fans with their favorite shows and characters. One such beautiful heart-warming story is Baarish Aur Chowmein, starring supremely talented actors Taapsee Pannu and Amit Sadh in lead roles. Monsoons in Mumbai have always had a significance of their own and Mumbaikars love to binge on something hot and spicy during the rains. Well, Baarish Aur Chowmein indeed makes for a perfectly imperfect combination in the monsoons. Directed by visionary Director, Tigmanshu Dhulia, the film is set to premiere on Zindagi’s DTH platforms, on 27th November at 8pm.
Baarish Aur Chowmein revolves around the story of a Muslim man Siraj , essayed by talented actor Amit Sadh, who is looking for a house on rent in Mumbai. He faces various challenges as not many landlords are willing to accommodate a Muslim tenant. Desperate to seek a roof under his head, Siraj hides his true identity and eventually finds a home. Life takes a different turn when Siraj falls in love with his landlord's daughter, Neelu (Taapsee Pannu). A young, bubbly Maharashtrian girl, Neelu works as a background dancer in Hindi films. With their strikingly opposite personalities and ideologies, Siraj is completely smitten by Neelu, and asks her to love him in exchange for a monthly salary. This unusual settlement leads to many revelations between the two.
Talking about the film, actor Taapsee Pannu said, “Talking about the film, actor Taapsee Pannu said, “Baarish Aur Chowmein is a beautiful and impactful film. It speaks volumes and showcases the subtle realities of life to the audiences. Just like the title of the film, the two characters Siraj and Neelu are poles apart yet complement each other entirely. Essaying the character of Neelu was indeed a creatively satisfying experience. She has many complex layers to her personality and sinking into her mind was challenging and fulfilling for me as an actor. Moreover, working with an ace director like Tigmanshu Dhulia and a passionate actor like Amit Sadh was a great experience. I am looking forward to the Indian television premiere of the film and hope audiences can resonate with the storyline.”
Shedding light on his character, actor Amit Sadh said, “Baarish Aur Chowmein gave me the opportunity to essay a very intriguing character,Siraj. Torn between his identity and his needs, Siraj’s character experiences an inner turmoil at various levels, which made the character challenging and also helped me explore various aspects of myself as an actor. It was an incredible experience to work with a stalwart director like Tigmanshu Dhulia and supremely talented and dedicated actor like Taapsee Pannu.”
Baarish Aur Chowmein is here to take the audiences on a journey of emotions, drama and more this November!
Tags : Taapsee Pannu Amit Sadh Baarish Aur Chowmein