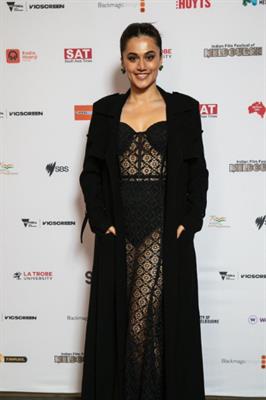 Taapsee Pannu and Pavail Gulati starring upcoming thriller, Dobaaraa directed by Anurag Kashyap and written by Nihit Bhave has officially opened the Indian Film Festival of Melbourne 2022 in the most grand and glorious way. The Australian premiere and opening night was attended by Anurag Kashyap, Taapsee, Tamannaah Bhatia and Rithvik Dhanjani in presence of hundreds of Indian and Australian audiences. The film received thundering response after the screening making a proud moment for the filmmaker Anurag and the film's leading lady Taapsee.

Speaking about the premiere Taapsee said, “Excited the film is being screened here in Australia a week ahead of the India release. I hope everyone sees and appreciates the film, it’s a whole new genre and the concept of time travel and parallel universe which is being experimented for the first time in the Hindi film industry."
Dobaaraa’ is scheduled to be released worldwide on August 19. The film marks Kashyap and Pannu's third collaboration after the 2018 hit ‘Manmarziyaan’ and biographical drama ‘Saand Ki Aankh’ (2019), on which he served as a producer. It also reunites her with ‘Thappad’ co-star Pavail Gulati. The film is jointly produced by Ektaa Kapoor's Cult Movies, a new division under Balaji Telefilms, and Sunir Kheterpal and Gaurav Bose's banner Athena.

After a two year break from its physical festival, with the last two years being only virtual, IFFM is being held both physically and virtually, from 12-20 August 2022 in person and 13-31 August virtually. In the last 13 years, the festival has gone on to become one of the biggest Indian film festivals that takes place outside of India and is also the only Indian film festival backed by the government.