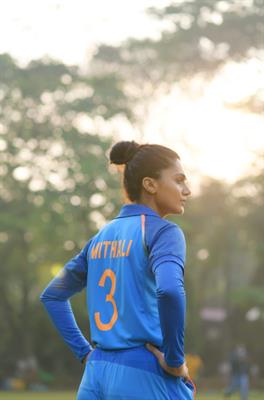 The much-awaited song from Shabaash Mithu – Fateh is out now! composed by Salvage Audio Collective & Charan, the song packs a punch and adds to the chord of grit and determination showcased in the film which is based on the life of iconic cricketer Mithali Raj.
Starring Taapsee Pannu, the film follows the journey of an inspirational cricketer who brought Indian women’s cricket to the forefront, debuting at a young age of 16, going on to captain the team at just 22, and a record-breaking career spanning over 23 years.
The song embodies everything Shabaash Mithu is pivoted on. The core of the song lies in the spirit of fighting against all odds and never giving up.
Fateh is an ode to every young girl and woman out there, a call to arms to follow their dreams and put in the blood and sweat fearlessly because ‘dreams do come true!’
Produced by Viacom18 Studios and directed by Srijit Mukherji, the film releases in theatres on 15th July.
Tags : Taapsee Pannu Shabaash Mithu