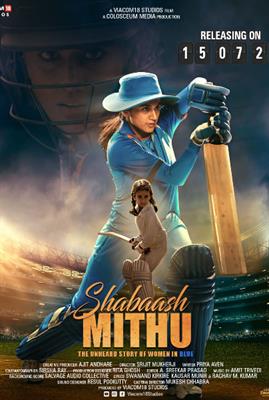 Viacom18 Studios’ Shabaash Mithu, is set to hit the silver screen on 15th July, 2022! Tapsee Pannu essays the role of iconic cricketer, Mithali Dorai Raj.
The celebrated skipper of the Indian Women's Cricket Team has a career spanning 23 years, 7 consecutive 50s in ODIs and has led India in 4 World Cups. The story tracks her journey from being an 8 year old girl with a dream to becoming a cricketing legend.
Viacom18 Studios is one of India’s finest fully integrated motion picture studios with a legacy of telling extraordinary stories of extraordinary women. It has emerged as a force to reckon with by delivering a string of critically-acclaimed and commercially-successful movies across languages.

Directed by Srijit Mukherji, written by Priya Aven, the much anticipated film is releasing in theatres on 15th July.