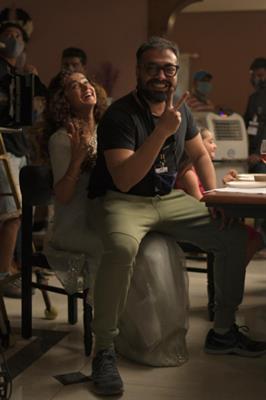 All set to release on 19th August 2022, Ektaa R Kapoor and Anurag Kashyap’s highly anticipated new-age thriller 'Dobaaraa' is gazing all the lights for its premiere at London Film Festival. The lead actress Taapsee Pannu is equally excited to present the film at the #LIFF2022 on 23rd June, 6 PM.
DOBAARAA will mark yet another collaboration of the director-actor duo, Anurag Kashyap and Taapsee Pannu, who are all set to bring a new-age thriller drama to the audience. Ahead of its release, the female lead Taapsee shares her excitement about showcasing the film on such a grand stage, she said "I am really looking forward to see the first audience reaction. It's going to be quite nerve-racking because it's the first time open audience is watching the film. So yes, I am excited but I am equally nervous now. But London, that makes everything feel a little better".
Dobaaraa is the first film under Balaji Motion Pictures new wing, Cult Movies, which tells compelling, edgy & genre-bending stories. Watch Dobaaraa on 19th August 2022 at the cinemas near you.
Tags : Taapsee Pannu Dobaaraa Ektaa R Kapoor Anurag Kashyap