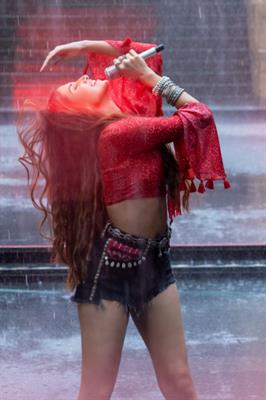 Director Mohit Suri's films have always been noted for having chart-topping songs like Galliyan and Tum hi ho. Even his new film Ek villain returns seems to have excitement stored for the fans as  the actress, Tara Sutaria is making her singing debut alongside music phenomenon Ankit Tiwari in the soulful song 'Shaamat.' The lyrics for the song have been written by Prince Dubey.
The first two songs released Galliyan Returns & Dil have been chartbusters already and have touched the hearts of so many fans and have been relatable to the audience. Shaamat gives a new tone to the album with it being the rock anthem of the year.
Tara has had concerts in India and abroad at the royal opera house and NCPA in mumbai among other prestigious venues. Now, finally making her film singing debut in her upcoming star-studded movie, Ek Villain Returns. The fans are going to be definitely in for a treat, as the song is set to release on 16th July. Talking about it, Tara said,” This is such a wonderful moment in my life and an incomparable feeling because Shaamat was the first Hindi song I’ve ever recorded and also the first track to release of mine in this film.. It has a lot of emotions and memories attached to it. My character in the film is what really excited me to be a part of it but the music was definitely a driving force. I’m also so happy to collaborate with Ankit Tiwari and very eager to see the response of the audience.”
Meanwhile, Ankit Tiwari said, “Shaamat is a song very close to my heart and I am glad people will now get to hear it. Working with Tara on this was great and she put all her efforts into perfecting her art for the vision of this song. Can’t wait to see how the audience reacts to it”
Starring a powerful ensemble cast including John Abraham, Arjun Kapoor, Disha Patani, and Tara Sutaria, Ek Villain Returns will release worldwide on 29th July 2022. The movie is directed by Mohit Suri and jointly produced by T-Series and Balaji Telefilms.
Tags : tara sutaria Ek Villain Returns