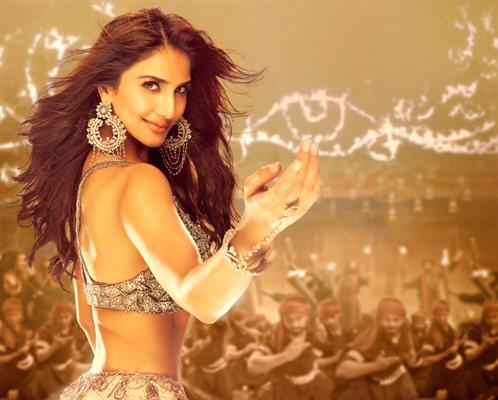 Ranbir Kapoor is playing a larger than life quintessential Hindi film hero with the action entertainer Shamshera that releases this Friday, July 22. In the release week of the much awaited action spectacle, Yash Raj Films released a teaser to another big song ‘Kaale Naina’ which the makers are holding back for the film so that people have more to discover about Shamshera when they see it in its full glory on the big screen! The hugely mounted song features Vaani Kapoor, Sanjay Dutt and also has Ranbir Kapoor at his mischievous best.
About the song, director Karan Malhotra says, “Ranbir’s performance unfolds like the Navrasas in Shamshera, meaning that he dabbles into many genres in a single film. While he will be seen in a never seen before action avatar, he will also be delivering irreverent wit as Balli. Balli is the king of mischief in Kaza prison, and in the song Kaale Naina, our big dance number featuring the ravishing Vaani Kapoor as Sona, Ranbir will be at his comic best.”
He adds, “I can’t reveal much about the song Kaale Naina, our most cherished one. Given how strongly we feel about its unique entertainment value, we want our audience to celebrate it in all its glory on the big screen. It has Vaani looking gorgeous. It has the sensational swag of Sanjay Dutt, and it has Ranbir Kapoor, putting up a never seen before act. We hope audiences dance on Kaale Naina when they see the full song only in theatres!”
Ranbir, who is coming to the big screen four years after he delivered the blockbuster Sanju, is pitted against Sanjay Dutt who is playing an evil, merciless, cold-hearted brute force of nature, Shuddh Singh. Sanjay Dutt vs Ranbir Kapoor is the clash of the year on the big screen.
About his comic timing in Kaale Naina, Ranbir says, “Kaale Naina is a fun song that will show Balli’s mischievous personality. He is always up to something and always up to no good. He is a happy go lucky guy and is a total daredevil. He is someone who will always choose dare no matter how big the risk. He feels no one can catch him and he takes pride in being an absolutely slippery guy. I’m certain that people will have a huge laugh seeing the antics that he pulls off in Kaale Naina.”
He adds, “The song has Vaani Kapoor looking sensational and it essentially shows off their playful chemistry with each other. YRF wants to keep this song for people to discover in the film. They are confident that this song will be a talking point and they want to hold it so that there is more anticipation for the song when people see the film. I just hope that people love Balli’s mad, funny histrionics and the song entertains everyone when they see it in theatres.”
The story of Shamshera is set in the fictitious city of Kaza, where a warrior tribe is imprisoned, enslaved and tortured by a ruthless authoritarian general Shuddh Singh, played by Sanjay Dutt. This is the story of a man who became a slave, a slave who became a leader and then a legend for his tribe. He relentlessly fights for his tribe's freedom and dignity. His name is Shamshera.
The high-octane, adrenaline-pumping entertainer is set in the 1800s in the heartland of India. It has the big promise of a never seen before Ranbir Kapoor, who plays Shamshera in the film! Sanjay Dutt plays Ranbir’s arch-enemy in this huge casting coup and his showdown with Ranbir will be something to watch out for as they will ferociously go after each other with no mercy.

Directed by Karan Malhotra, this action extravaganza has been produced by Aditya Chopra and is set to release in Hindi, Tamil and Telugu this Friday!