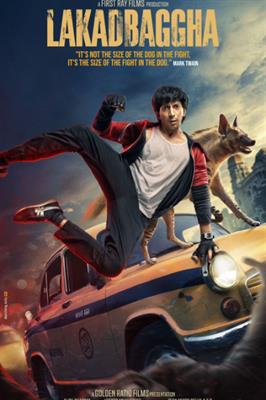 The teaser poster of the Action-Thriller film 'Lakadbaggha’ is here. The first look of the movie starring - Anshuman Jha, Ridhi Dogra, Paresh Pahuja and Milind Soman has a pop vibe to it and looks like a hard-hitting film set in Kolkata. The action movie, written by Alok Sharma & directed by Victor Mukherjee, is the first of its kind with the lead character being a vigilante for animals. The film is set to release this Winter.
‘This time a man will prove his loyalty towards his canine friends’ is the theme of the film.
The story is about an ordinary boy on an extraordinary mission - to fight against the illegal animal trade industry. An animal loving vigilante Arjun Bakshi, while trying to protect his adopted Indian stray dogs, unearths the fact that an underground illegal animal trade cell  functions from Kolkata port. On investigating he chances upon a rare species of the Indian Striped Hyena (Lakadbaggha) - which has been kidnapped from Corbett National Park & is being sold in the black market.  The motion picture aims to stir up conversations about some sensitive topics like encouraging Indian breed adoption amongst dogs, illegal animal trading, animal poaching & having a voice for our (p)awesome friends.
Anshuman, who leads the film, had put 6 months+ into training in Krav-Maga (Israeli Martial Arts Form) & also went to New York to train under Tsahi Shemesh (Trainer of the Avengers team-Falcon & The Winter Soldier). The actor says being an animal lover himself, the movie is quite close to his heart. “Animals & action films are two of my BIGGEST passions. After playing a gay man in Hum Bhi Akele... I wanted to do something high octane but pure. I have given 12 months + of my life in training+shooting & trying to be authentic towards the 'Hand-To-Hand' martial arts form this movie brings to India 'Krav-Maga' - its just raw street fight style action. It is an Action Thriller made by a bunch of animal lovers so it's not JUST an Action film, it has more. I am grateful to the team, especially the stunt team on the film.” says Anshuman.
Ridhi, who has been making waves on TV & the Web, is making her Bollywood debut with the movie. “This film is special at many levels. At the heart of it is the story. Not everyday you see a film that has the good mix of content with masala. This film dwells into the plight of animals and their welfare. That instantly made me want to do it as my bollywood debut. Second thing was the action and the character I got to play. At this point perhaps I can’t say much, but I will say - I definitely wanted to do something different than the characters I’ve played on the web - for a first film and this film and my part in it gave me that experience. I have always chosen my projects based on the team. Anshuman's choice and his passion for animals & the stellar international team at work,  I wanted to be a part of the story from the very first reading.  Anshuman is just so clear and incredibly planned in how he wanted to take the process of the film - his precision & clarity is a joy as an actor for me & rubs off on the team."
Produced by First Ray Films - their last release was the successful Disney+Hotstar Multiplex release 'Hum Bhi Akele, Tum Bhi Akele' - an LGBTQ+ love story in 2021 starring Anshuman Jha & Zareen Khan. And is Presented by Golden Ratio Films, a part of Vistas Media Capital, who have a stellar line up of movies coming up across languages.
Tags : Anshuman Jha Ridhi Dogra Milind Soman