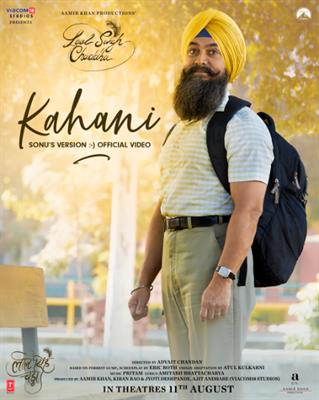 The music video of the listener’s favorite song ‘Kahani’ was released yesterday and since then it has garnered love from all quarters. While some are appreciating Sonu Nigam’s refreshing voice, some feel that the video of Kahani fits like a piece of a puzzle.
While makers of Laal Singh Chaddha have released all four songs in the audio form, ‘Kahani’ is the first song from the upcoming film to have visuals.
Now that the visuals of Kahani are out, netizens can not stop gushing about it. The heart-warming music video of the latest release has made a mark in the audience’s hearts and they can not be any more excited to watch the film.  Check out what the cybernauts have to say about the music video of Kahani -

wow,it is such a lovely song and the video is so beautiful as well.laal is sososossoossoso cute and lovely.he is not a smart one but he always believes thing can be better. as a child,he looked not amart but saw the world in a different light.and the ligt is so wonderful. https://t.co/i1Twzl2U8l

The audio version of Kahani, whose music has been given by Pritam and lyrics are written by Amitabh Bhattacharya has garnered love nationwide. The song became one of the most popular songs on the internet within 24 hours after its release, and continues to make impressive records.

For the unversed, Aamir Khan wanted to release all the songs without a music video so that the musicians, singers, lyricists, and technicians remain under the spotlight. So far the star has released ‘Kahani’, ‘Mein Ki Karaan?’, ‘Phir Na Aisi Raat Aayegi’ and ‘Tur Kalleyan’ in the audio version and this is the first time the makers will release a music video.