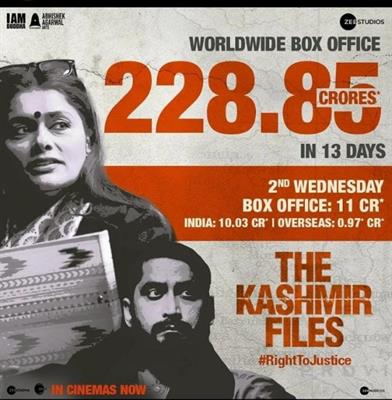 The team of ‘The Kashmir Files’ is super excited about the critical acclaim and the humongous response the movie has been receiving across the country. Certainly, one of the most talked about and highly debated films of its time, the exodus drama has been performing supremely well at the box office, breaking records set by biggest money-spinners of Bollywood and setting the cash registers ringing.

Despite many odds including non-holiday release, limited promotions, limited screen count and big competition from ‘Radhe Shyam’ and ‘Bachchhan Paandey’ ‘The Kashmir Files’ has emerged a winner at the box office.

With huge critical acclaim, hard-hitting narrative and stupendous performances, ‘The Kashmir Files’ is performing spectacularly well at the box-office and is expected to hit the target of Rs 175 crores on this coming Monday, 21st March.

Living up to its title, ‘The Kashmir Files’ is a true story, based on video interviews of the first generation victims of The Kashmir Genocide of Kashmiri Pandit Community. It’s a heart-wrenching narrative of the pain, suffering, struggle and trauma of Kashmiri pandits and questions eye-opening facts about democracy, religion, politics and humanity.