The makers of Thank God release the perfect song for the season of love, Dil De Diya 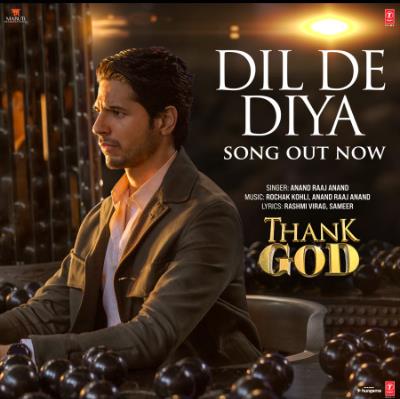 After dropping the most entertaining and special Diwali trailer for the viewers, the makers of the most awaited fantasy comedy Thank God, released a new romantic number ‘Dil De Diya’ from the film.
The song showcases the remembrance of the beautiful chemistry between the leading duo, Sidharth Malhotra and Rakul Preet Singh while he’s also fighting the battle between life and death. The romantic number also depicts the beauty and importance of love in every situation. Dil De Diya is a perfect reminder to believe, “Love makes everything better, no matter how difficult life is.” The song is sung in the melodious voice of Anand Raaj Anand and the lyrics are penned by Sameer.
Ajay Devgn, Sidharth Malhotra and Rakul Preet starrer Thank God is a hilarious roller coaster of emotions, where Chitragupta plays the game of life with a common man Ayan, reminding him to become a better human being through a comic lens making this film a perfect Diwali treat for the fans.