The new song ‘Do Ghante’ from the upcoming movie Ishq Pashmina is the next trending song on your favourite social media! 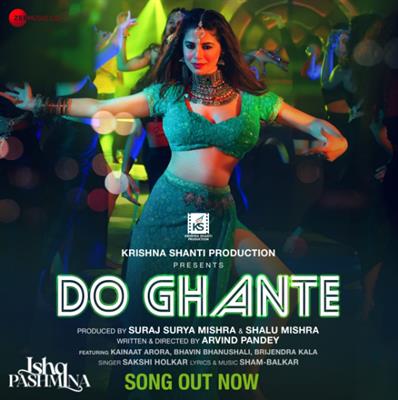 Presented by Krishna Shanti Production, ‘Ishq Pashmina’ has arrived with a new item number featuring Kainaat Arora. The item number “Do Ghante” is an energetic and exotic song with eye-catching visuals and dance steps. Alongside Kainaat Arora, the lead Bhavin Bhanushali and Brijendra Kala is seen.
Emanating every aspect of hotness, Kainaat has given her utmost best with energetic dance steps choreographed by Feroz Khan. Kainaat Arora is seen in movies such as Grand Masti, Khatta Meetha, Faraar and many more.
Actress Kainaat Arora shares, “It was a great experience of shooting for this song. I was excited to be leading the main role  in the song. It was quite nerve-racking and very fulfilling to complete this song. The hook step is definitely my favourite and it was an amazing experience of learning the choreography. The song is very catchy and once you listen to it, you are going to want to listen to it again and again. I am hopeful that the audience will love the song and groove to its beat on their party nights!”
The producers of the film Suraj Surya Mishra and Shalu Mishra were personally involved in the late night shoots of this song and made sure that everything about it was perfect. From the budget to the execution, everything was done with immaculate precision as it is one of the favourite songs of the producers as well. They are very hopeful of this song that the punchline will definitely become a favourite of the audiences.

The song is penned by Sham-Balkar and sung mellifluously by Sakshi Holkar who has given us songs such as Maiyya Mainu from the movie Jersey starring Shahid Kapoor and was also seen in the Indian Idol Junior 2. The movie is set to release on September 23rd on the big screens near you and is directed by the debutant director Arvind Pandey.