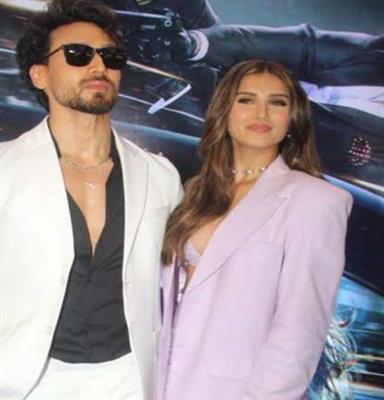 Earlier today, Tiger Shroff left the media impressed with his singing chops. Life comes full circle for the youngest and most successful action star in the country, who made his big Bollywood debut in Heropanti and now makes his singing debut in a feature film with Heropanti 2’s track ‘Miss Hairan’.
Dedicating the song to his co-star Tara Sutaria, Tiger engaged with the audience and encouraged them to sing along with him during the press launch of the song.
Apart from the cutting-edge, high octane action, picturesque visuals and some great performances, ‘Miss Hairan’ is yet another highlight in Sajid Nadiadwala’s highly anticipated action entertainer ‘Heropanti 2’.
The film marks the third collaboration between Tiger Shroff, director Ahmed Khan and producer Sajid Nadiadwala after Baaghi 2 and 3 as they look to push the envelope and set a new benchmark with the film.

Written by Rajat Arora and music by A R Rahman, Sajid Nadiadwala’s ‘Heropanti 2’ is directed by Ahmed Khan, who also directed Tiger’s last release ‘Baaghi 3’. The movie is scheduled to release in theatres on 29th April, 2022 on the auspicious occasion of Eid.