‘Tinka’ a new melody from Hit: The First Case is out now! 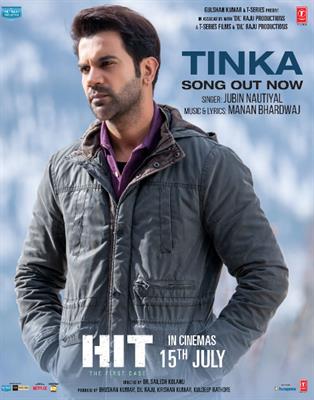 The highly anticipated film, Hit: The First case has created a stir amongst the audiences with its suspense-driven trailer. The recently released song ‘Kitni Haseen Hogi’ from the film showcased charming chemistry between Sanya and Raj has garnered amazing response from the masses. To add to the excitement, the makers have released the beautiful song from the film titled Tinka, which encapsulates the feeling of longing and aspirations.
The soulful melody is penned & composed by Manan Bhardwaj. Delivering justice to Manan’s composition, Jubin Nautiyal has sung the song with utmost grace. Song depicts a sense of yearning towards life as the protagonist Vikram is fighting against all odds. The sonorous voice of Jubin truly add ups to Rajkummar’s performance making beautiful for eyes and soothing for ears. Tinka is a song that evokes the feeling of hope that perches directly in the soul.
Unfold this alluring chemistry between Rajkummar Rao and Sanya Malhotra only in HIT: The First Case.

Gulshan Kumar and T-Series present in association with Dil Raju Productions HIT: The First Case. Directed by Dr. Sailesh Kolanu, the film is produced by Bhushan Kumar, Dil Raju, Krishan Kumar, and Kuldeep Rathore. The film starring Rajkummar Rao and Sanya Malhotra hits the theatres on the 15th of July, 2022