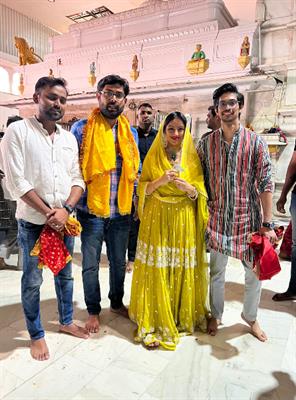 It is said that without the blessings of the almighty, no new work is complete.To seek the blessings of Rajasthan famous Kathu Shyam ji and Salassar Hunuman. The lead  Deepika Singh and Ashram fame Tushar Pandey alongwith the director Rohit Raj Goyal and producer Dinesh Kumar had visited Rajasthan for the blessings before the release of the film.
Produced under the banner of Sabal Productions,Titu Ambani is directed by Rohit Raj Goyal, Produced by Mahendra Vijaydan Detha and Dinesh Kumar. The film has been shot at various locations in Udaipur. The film will  be released in cinema halls on 8th July
Deepika Singh who has become a household name in India is all set to make her bollywood debut with the film Titu Ambani.Diya aur batti’s Sandhya aka Deepika Singh will be seen on silver screen.Famous for her strong character ,Deepika in Titu Ambani will play a character named Moushumi who lives her life on her own terms
The story of Titu Ambani revolves around Mosmi and Titu.Mosmi feels that she and Titu are made for each other but later Titu’s decision endanger their Mosmi is a strong girl and the story will show how she never compromises her principles.The film is a simple love story of a middle class family that conveys a strong message in an entertaining way.
The film will feature actor Television star Deepika Singh and Ashram fame Tushar Pandey, Raghubir Yadav, Sapna Sand, Virendra Saxena, Samta Sagar, and Bijendra Kala will be seen in other prominent roles in the film.
On this Deepika Singh quoted I have an old connection with Rajasthan and it’s culture.My debut TV serial was set in the background of Rajasthan and I have shot  my debut film in Rajasthan as well. I feel blessed  and warm with the gestures of Rajasthani people. Before the release of our film we have come to seek the blessings of Kathu Shyam ji and Salasar Hanuman ji.
Producer Dinesh  Kumar quoted I have my roots in Rajasthan and without the blessings of Kathu Shyam ji and Salassar humanji,I can’t think of doing any new work.Its their blessings that we have successfully completed our film and it’s ready for the release.We have tried our best to present a simple yet inspiring  story in an entertaining manner.We are looking forward for its release.
Tags : Titu Ambani Tushar Pandey deepika singh goyal