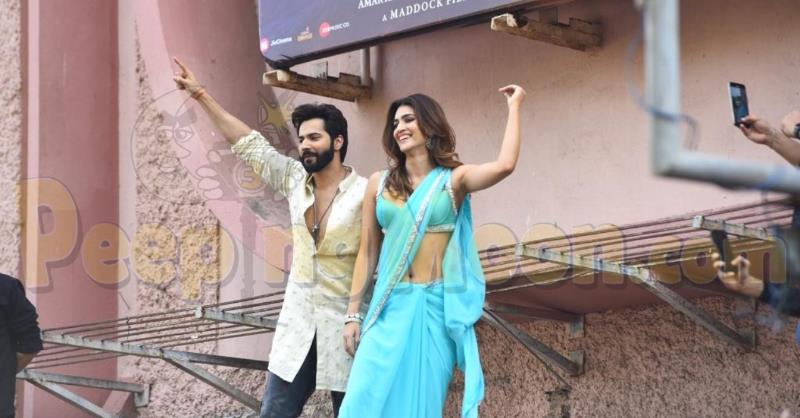 This wolf is winning all hearts! While Bhediya’s thrilling trailer set the whole world ablaze, the launch event of its first song has created quite a dhamaka too. Mumbai’s legendary Gaiety Galaxy cinemas saw the official launch of ‘Thumkeshwari’, Bhediya’s very first track. The event was nothing less than a super hit spectacle as fans from all across the city flocked to Gaiety Galaxy to witness the launch.
People hooted, cheered and went berserk as leads Varun Dhawan and Kriti Sanon shook a leg inside the theater’s hall as well as its much famed roof. Sources reveal that a record number of more than 1500 fans thronged the venue to witness their favorite two stars release the grooviest song of the year.
A funky dance number that features Bhediya’s leads at their masala best, Varun and Kriti also invited members of the media and the fans to jive with them on stage during the event. If the response to the song launch is anything to go by…Thumkeshwari is a tune that will take over dance floors one thumka at a time. Jio Studios & Dinesh Vijan present, ‘Bhediya’.
A Maddock Films production, directed by Amar Kaushik, produced by Dinesh Vijan and starring Varun Dhawan, Kriti Sanon, Deepak Dobriyal and Abhishek Banerjee among others, is releasing in cinemas Pan-India in Hindi, Telugu and Tamil in 2D and 3D on 25th November 2022.
Tags : Varun Dhawan Kriti Sanon Bhediya