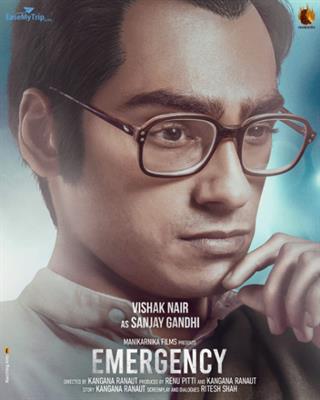 In the first look of her next film Emergency, Kangana Ranaut proved why she is hailed as the Queen of Bollywood. The actress is known for her knack of getting into the skin of her characters and this time around she nailed the look of Mrs Indira Gandhi, by looking like a spitting image of the late political icon.
The film is Ranaut’s second directorial after the Superhit historical Manikarnika based on the life of Rani Laxmibai. Ever since the first announcement, Emergency has piqued the interest of fans because of its power packed ensemble. Alongside Ranaut, the film stars Anupam Kher, Shreyas Talpade and Mahima Chaudhry, Milind Soman amongst others. And now, the latest to join the movie is Vishak Nair as Sanjay Gandhi, Mrs Gandhi’s younger son and political scion who is often referred to as the Dark Prince of Emergency.
Talking about the character of Sanjay Gandhi and her actor Vishak Nair, Kangana Ranaut says, “Sanjay is one of the most crucial people in Mrs Gandhi's life. For this I needed someone who played a man with his innocence intact but who is also shrewd at the same time. He is equally competent and equally passionate. The man needed many shades and can play a whole spectrum of emotions. Sanjay is an extension of his mother. I looked for a face for more than 6 months and I decided to launch him as the face. I am glad that after Avneet I am launching a new face in a very big scale film. Vishak is a tremendous actor and has done a slew of Malayalam movies. This is his first Hindi film and I am certain he will do great justice to Sanjay's character.
Vishak Nair adds, “It has been an incredible experience working on the film. Especially with Kangana Ma’am. It’s been unlike I have ever been a part of in my career. I play a historically significant and enigmatic individual and I am truly grateful for the opportunity to be part of such an incredible film. Working with Kangana Ma’am has been an absolute joy and a fantastic learning experience as well. It’s been quite something to work with such accomplished artists. I can flex my acting muscles and I have not had the opportunity as an actor to push myself in such a role.”
Manikarnika films presents Emergency which is written and directed by Kangana Ranaut. The film is produced by Renu Pitti and Kangana Ranaut. The screenplay and dialogues are by Ritesh Shah.
Tags : Vishak Nair Sanjay Gandhi