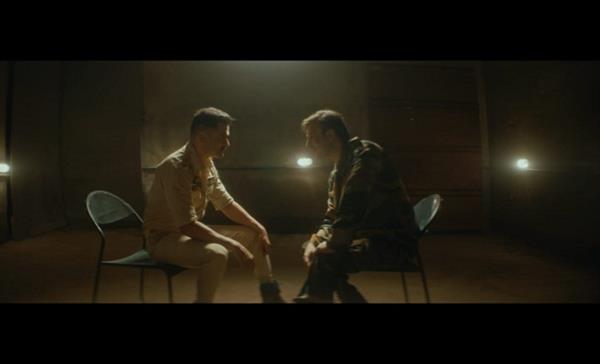 In the film, Vivek plays a brave soldier from the Indian army who loves to write and recite poems. The trailer gives us an idea that ‘Verses Of War’, unlike most other short films, has been mounted on a lavish scale. We see elaborate action scenes, well-designed sets and visuals that redefine opulence. The trailer leaves a great impression and makes the audience wanting to know more about the narrative.

Talking about his character, Vivek Oberoi says, “Playing an Indian army officer was a long-standing dream for me and finally, with this film I got to realize it. It’s been an honor playing a soldier and through this film, I wish to pay a tribute to all those brave men who make so many sacrifices just to keep us safe. ‘Verses Of War’ will always have a special place in my filmography. It’s a film that I will always be proud of.”

What makes the film unique is the fact that it shows an Indian army officer and a Pakistani army officer (played by Rohit Bose Roy) having conversations about war and peace. Their common love for poetry forges a bond between these two officers, across borders, from India and Pakistan.

Says, Rohit Bose Roy, “Love for one’s nation is paramount for every soldier. But when you transcend boundaries for one’s respect & honour, is when you feel sheer bliss & contended.” He adds, “Elated to be part of Verses Of War, truly proud.”

Director Prasad Kadam, who has earlier helmed much appreciated short films like ‘Chuha Billi’ and ‘Happy Birthday’, had full backing of his producers, FNP Media & together they ensured that no compromises were be made while making ‘Verses Of War’.

Says Prasad Kadam, “I am very happy with the final outcome of the film, as the film on the Indian army needed to be made with a certain amount of sensitivity, which I am sure, is there.”

Producer Vikaas Gutgutia says, “At FNP Media, we want to tell stories, which connects with all audiences across the board. Verses of War, is our proud presentation, which we are sure will be embraced by all. It’s an honour to be releasing this on the occasion of our country’s Republic Day.”

“Verses Of War, is a very poignant & impactful story. It’s a dedication, from us all, at team FNP Media, to all the brave soldiers, across the world. A humble tribute to all the brave”, says Producer Girish Johar.

‘Verses Of War' teaser brings alive the patriotic fervor across every Indian and celebrates the achievements of our brave soldiers. It has been produced and presented by FNP Media, Vikaas Gutgutia, Girish Johar and co-produced by Vivek Anand Oberoi and Oberoi Mega Entertainment. The short film is directed by Prasad Kadam. Featuring Vivek Oberoi, Rohit Bose Roy & Shivanii Rai, to have its exclusive premiere on 26th January on FNP Media’s official YouTube channel.