Watch: Kartik Aaryan and Varun Dhawan burn up the dance floor together in adorable video! 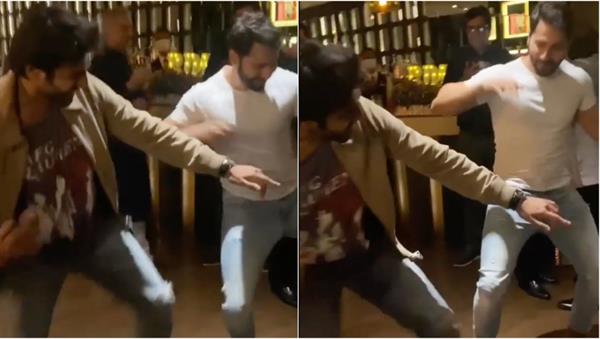 David Dhawan recently celebrated his birthday in Mumbai a few days ago and while various pictures from the event have been doing the rounds, one that has specifically gone viral is the adorable video of Kartik Aaryan and Varun Dhawan dancing to the former's superhit party jam, Bom Diggy as fans cannot get over this bromance.
In the clip, Varun can be seen rocking a plain white tshirt and blue jeans as he matches steps with Kartik who is dressed in a grey printed tee under a brown jacket with blue jeans as both look extremely dashing while they burn the dance floor up.

The young superstar, Kartik Aaryan recently delivered the biggest opening of the year and a superhit of 2022 with Bhool Bhulaiyaa 2 and is now all set to be seen on the big screens in his next, Shehzada, directed by Rohit Dhawan, who was also seen in multiple photos with Kartik at the birthday bash.
On the work fronts ahead, Kartik Aaryan will be seen in Shehzada, Freddy, Captain India, Satyaprem Ki Katha and an untitled project by Kabir Khan.
Varun Dhawan who was last seen in the multi-starrer, Jugg Jugg Jeeyo, is all set to be seen in the horror comedy, Bhediya by Amar Kaushik and his next with Sajid Nadiadwala, Bawaal.
Tags : kartik aaryan Varun Dhawan