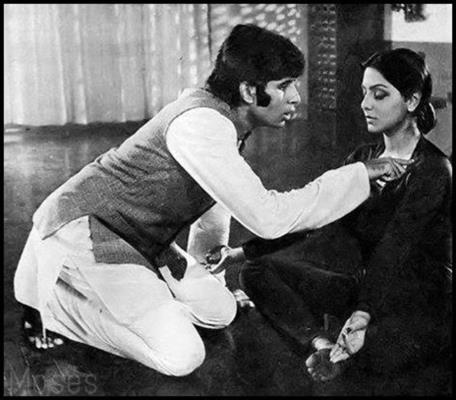 This amazingly ‘serious’ prank by the icon for the icons Amitabh Bachchan on Neetu Singh will make your evening and fill your coming days with smile.

Tere Jaisa Yaar Kaha remember the song sung by Kishore Kumar?, yes why not so many of us has used this as an anthem of friendship and sung at many occasions no matter where our ‘sur’ is landing but the emotions are right from heart.

Apart from the above song and the prank we are about to mention, Yaarana is a classic on its own that will remain in our hearts for the evergreen melodious numbers by Rajesh Roshan like “Chhookar Mere Mann Ko," "Tere Jaisa Yaar Kahan," and "Saara Zamana Haseeno Ka Deewana" and yes of course that Amitabh Bachchan's dance with clothes fitted with electric bulbs.

But right now let’s come back to that serious prank,

In one of the scenes during the shooting of Yaarana, Neetu Singh was supposed to run towards Amitabh Bachchan and say,” Kishan….Kishan waha chor hai (Kishan, there are thieves over there).

But surprisingly, to the amusement and surprise to everyone on the sets, Neetu Singh said, “ Amitji, Amitji waha chor hai (Amit Ji, Amit Ji there are thieves over there)

The unit was amused but Amitji in his trademark serious intense style which we all have seen in Deewar Trishul. A considerably mellowed down version we see nowadays in KBC when he politely and firmly refuses to give any hint to the contestants.

For a while the whole unit was speechless but Neetu Singh who knew about the prankster in Amitabh Bachchan couldn,t stop her laughter and burst out laughing leading to a LOL moment for all present.

Amitabh Bachchan has been famous during his younger days for his pranks.

T 4071 - 40 years of this magnificent film YAARANA .. this song done in the NS Bose Stadium in Kolkata .. first time ever a film shoot ..total madness .. and the well wishers of Bengal .. no where can we compare their their love and enthusiasm to .. astounding pic.twitter.com/WxoFHi0Kj4