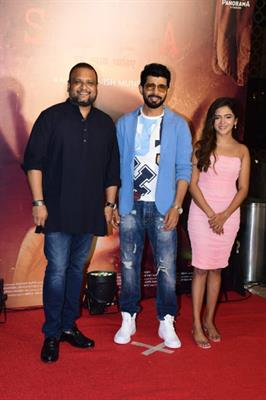 Manish Mundra 's directorial  Siya is all set to hit the theatres on 16th September 2022. The makers hosted a screening for the entertainment fraternity last night in Mumbai and what a star studded event it was.
Celebrities like Aahana Kumra,Aakanksha Singh, Kubbra Sait, Shalini Pandey,Mukesh Chabbra,Suchitra Pillai,Anup Soni,Rahul Dev and Mugha Godse,Anjali Barot,Jameel Khan,Kirti Kulhari,and few more were in attendance. The screening was graced by Vineet Kumar Singh and Pooja Pandey who are playing the lead roles in the film.

Siya, produced by Drishyam Films is the directorial debut of Manish Mundra and is a film that narrates the story of a teenage girl and her struggle for justice against a heinous crime like sexual assault.