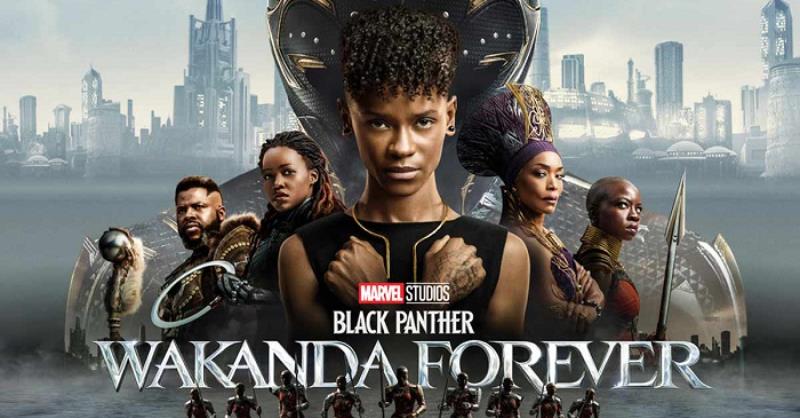 After a long, long time comes a Marvel universe film that is not hopelessly predictable. No evil aliens and no avengers saving the planet. This is a Wakanda love fest. You will, as I did, cry because the funeral for the Black Panther touches a chord as I have lost loved ones during the Pandemic.

Did Chadwick Boseman need a bigger goodbye? Perhaps. But I loved this film. This made me a believer in Wakanda’s power. And that’s not limited to Vibranium. It is in the stunningly beautiful women. Not just queen mother (Angela Bassett, who wears headgear that mostly looks like fancy lamp shades over her head), Black Panther’s scientist sister Shuri (Letitia Wright),  Black Panther’s girl Lupita Nyong’o but General Oh-my-goodness Okoye the gorgeous Danai Gurira and her Aneka (Michaela Coel). Whoever said you need big, beefy men to make a good action film can forever hold their opinions because I never once felt like looking at my phone, or step out for a coffee.

The story does not pause for a minute. From the funeral in Wakanda the film takes us to a secret site underwater where the French and the American mercenaries are trying to extract Vibranium. And you watch slack-jawed as the Wakandan song lures the mercenaries to kill themselves. Is this a new weapon Shuri has created in the lab?

Shuri’s lab is a little disappointing because she now has a very Iron Man style JARVIS AI. But as the story progresses, you realise why they would need a voice telling characters what’s happening elsewhere, and also to tell us what Shuri is doing with all that stuff in her lab. I wish there was a different device, but…

So who sang the song that lured the mercenaries to their deaths in the sea? Mermen? Mermaids?

‘I am the child without love. I am Namor,’ He says. And our collective hearts go out to this God who didn’t just lose his mother, but his home as well. The narrative about locals being driven out of their homes, enslaved  by conquerors and after escaping, trying to make a home in alien lands is a narrative beautifully told. You feel for the people. You are amazed at their story of resilience and adaptation. This is what we love about Marvel. The worlds they create are so visually stunning, and so believable that you are drawn into taking sides.

It would be amiss of me to not mention the jewellery everyone sports. Such great designs, I wish they’d make replicas like the Metropolitan Museum does and sell them on Amazon or something. And not toy jewellery. I’m talking about precious metals here…

That dialog about Hanuman seemed to be made for India, and the changing role for M’baku was just meh. But I suppose you needed some testosterone in this Wakandan Women are the coolest flick.

But the coolest trick Marvel films have perfected, are the funny one liner’s that come at you ever so often. This film is careful with doling out laughs. And this is a good thing. It’s the survival of a species that is in question. And yet, General Okoye’s ‘Colonisers’ gets a laugh every time she says it. The adorable Martin Freeman is adorable here. The story moves rapidly between Wakanda and the US and to the deep sea where people ride great white whales… What will James Cameron do with Avatar 2 if we have already seen Wakandans fight the sea people here?

I do seem to be wandering into the territory that could be full of spoilers. So I will stop. But not before letting fans of Micheal B Jordan know that you will see him. Will I watch this film again on the nearest gigantic screen again? You bet I will. Because I need to see the Mermans and Mermaids, and hear Mayan rap…