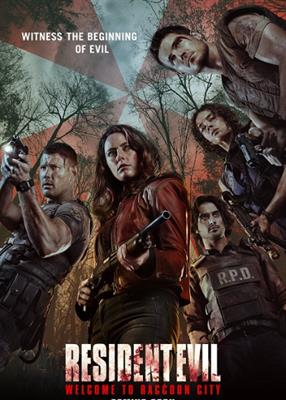 I dug out the old electronic Casio calculator diary and yelled at it: They have a darned Palm Pilot that works in this film! Why are you dead?

How effortlessly they travel back in time: 1998 and give us the origin story of how Umbrella Corporation (no relation to Umbrella Academy) and how it was experimenting on unsuspecting subjects and creating the T-Virus (it’s G virus in this film, but…).

Loved how the movie begins: a girl hitches a ride in the middle of nowhere in a truck. Obviously she hasn’t seen any horror movies because you wince at the trope. Obviously something bad is going to happen. And before you know it, the big truck has hit something… or somebody…

Oh teri! The trucker is traveling with a Doberman. One of the scariest breeds, the Doberman is already an intimidating breed. And the trucker calls the dog, ‘Boy!’ Erm… It’s like calling this scary dog ‘Bunty’, when he should be called ‘Shakaal’.

In my mind’s eye I see Munshiji from Karan Arjun run away from the scene, muttering, ‘Trucker toh gayo!’

The girl who hitchhikes to Raccoon town is Claire Redfield (Kaya Scodelario, whom you saw in The Maze Runner) who is in town to meet her brother Chris Redfield (Robbie Amell). The Umbrella Corporation has wound up operations and the town is practically empty except for the few poor folk who cannot afford to leave town.

You meet the characters from the video game: Leon Kennedy, Jill Valentine and Albert Wesker. The zombies are glorious when they appear and what unfolds is like your old video game. There is much screaming and bullets and flashing lights (the zombies come closer and closer), but then you want more than this paint by numbers horror flick that feels like watching someone else playing a ‘shoot the zombie’ video game.

The video game surprisingly has depth of plot (stop laughing, it happens!) and even though the film has everything: the police station, the Spencer Mansion as well as the orphanage, nothing really fits geographically in the movie. And fans of Leon Kennedy are going to be disappointed by this pathetic vocabulary. He only seems to know how to say, ‘Fuck!’ and he sounds boring. I wanted to chop off his hair (while some young person sitting in the audience was gushing over the fool).

Oh yes, Neal McDonough makes for a sinister William Birkin and the multi eyed monster that emerges afterwards is a visual delight.

This Grouch on the Couch would rather watch the other films in the franchise for the leather clad Alice and hoards of mad creatures directed by Paul W. S. Anderson rather than wait for Wesker to turn into a T-virus injected super monster.