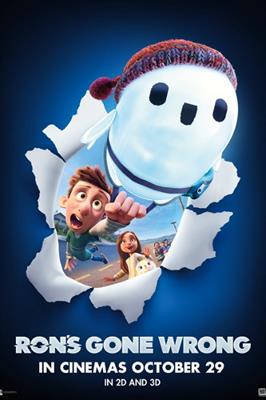 What: A relevantly timed reminder of the pros and cons of technology by director Sarah Smith and Jean-Philippe Vine. Ron’s Gone Wrong is an amusingly charming animated movie that has a cute heart and lovely voiceovers by Zach Galifianakis and Jack Dylan Grazer.

Ron's Gone Wrong is the story of Barney (voiceover by Jack Dylan Grazer), a socially awkward middle-schooler and Ron (voice over by Zach Galifianakis), his new walking, talking, digitally-connected device, which is supposed to be his 'Best Friend out of the Box.

Ron's hilarious malfunctions set against the backdrop of the social media age, launch them into an amazing journey between a human and a robot which comes to terms with friendship, bonding, understanding within all the mess around.

Since March 2020 the covid pandemic has made us more use to those gadgets, as our slick wheels where not allowed to move, we relied on our smart phones for frequent video calls to our friends, family members and our office work/meetings.

The ‘online’ thing became a phenomenon with many who are not familiar also getting into the grove.

The dangers of social media and the evil of technology loomed more freely as we tried to fill the vacuum of our isolations by getting connected on line.

The writer Sarah Smith along with co writer Peter Baynham and co director Jean-Philippe Vine add a satisfying dose of slapstick humour in its lessons on the goods and evils of technology.

The theme is not novel and the movie scores on its charming fun quotient and a cute robot.

Ron’s Gone Wrong has all the ability to please your child and the child in you but its ability to win hearts is limited.

Influence of movies like Short Circuit, and E.T.: The Extra-Terrestrial is felt but thankfully the inspirations are respected.

Zach Galifianakis is such a delight and Jack Dylan Grazer is so lovable. Both Galifianakis and Grazer make such a wonderful pair.

Olivia Colman as Barney's paternal grandmother is outstanding as the grandmother we all will love to have.

The message gets muddled in between for a while and the uncontrolled eagerness to highlight the boons of technology while trying to score fine points while criticizing remains a cause of concern.

The amusingly charmingly & heartfelt cuteness of Barney (voiceover by Jack Dylan Grazer), and Ron (voice over by Zach Galifianakis) is enough to take your kids along to the nearest theatre. The fun and cuteness quotient never goes wrong in Ron’s Gone Wrong